The Carrera S now produces 444bhp from its 3.0-litre turbo engine – performance is in the league you’d expect from a 911 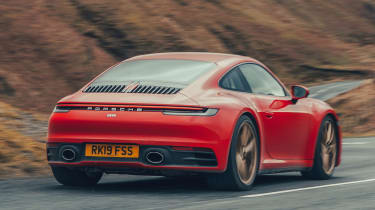 The 911 is powered by a 3.0-litre turbocharged flat-six engine, mated to an eight-speed PDK automatic transmission. There’s 380bhp on tap in standard Carrera models and 444bhp in the Carrera S; each feels every bit as quick as the impressive performance figures suggest, helped by the excellent transmission’s rapid-fire shifts.

In fact, the latest Carrera S feels at least as punchy as the previous 911 GTS, which boasted the same power output as this Carrera S. The new car revs with ferocity and a fairly free-spinning feel at higher rpm for a turbo engine. With 530Nm of torque sustained from relatively low down at 2,300rpm all the way through to 5,000rpm, the mid-range punch is great too. 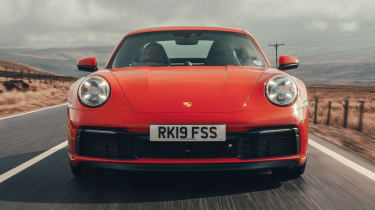 Four-wheel drive isn’t a necessity in our opinion as traction in the two-wheel drive car is so strong – especially if you activate the new 'wet' mode, which improves grip on greasy roads. You wouldn't know it was nipping away at the power, however, as even in this setting the 992 feels lightning quick.

This MMB platform, as Porsche calls it, features retuned PASM adaptive dampers that are more intelligent and now more adjustable on the move, monitoring the suspension’s state of travel up to 100 times per second and reacting to improve comfort and ride. But it’s not at the expense of handling; the agility of the car in slow corners is simply astounding. That wider front track means there simply isn’t an understeer problem on the road – the 911 turns, sticks and goes. But there’s a strong sense of communication with it.

Gone are the days where a 911’s steering moves with the road, but this electrically-assisted setup is faithful, consistent in its feel across the rack’s range of movement. It's quicker than its predecessor, too, which translates into an alert-feeling front end. You get an idea of the grip building up and ebbing away.

The more sophisticated suspension also means the car flows better on winding, poorly surfaced roads, but the level of control is still present. Its ability at each end of the spectrum appears to have been widened without compromising either trait. It's really quite impressive.

Selecting the PASM adaptive dampers and a 10mm chassis drop (a £665 option at launch) is worth it. In the softer mode the suspension is compliant, in Sport it feels stiffer vertically with a slight degradation to comfort and a tauter edge to the body control, but it’s not wince inducing. We’d still leave the suspension in its default mode most of the time though.

In fact, that’s how we’d choose to drive the 911, as the gearbox is still quick enough to shift, the chassis more compliant and therefore comfortable and the steering weight and throttle response just about perfect for this type of car.

Compared with its predecessor, the engine has been tweaked dramatically to improve performance and efficiency. New, larger and more efficient turbochargers are teamed with repositioned intercoolers (now on top of the engine) that offer better cooling of the intake air. This, along with Piezo injectors that operate at higher pressure and feature more injection pulses of fuel during the combustion cycle, result in a power hike up to 444bhp, while torque stands at 530Nm. Much effort has been focused on small detail improvements throughout the engine, but they add up to a noticeable result. 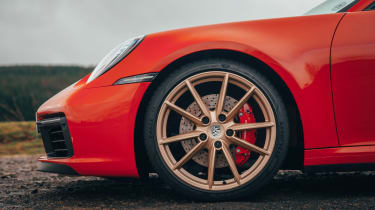 Throttle response is strong for a turbo engine. There’s still the faintest hint of lag, but only on rare occasions. In the right gear at the right revs, the new electric wastegates mean the pair of blowers spool up quickly, delivering a solid wall of torque that’ll hurl the 911 along at a not insignificant rate if you don’t feel like fully extending the motor. Efficiency is also part of the noticeable result, as we’ll see.

Performance is still the key though, and those turbos give the 911 incredible mid-range flexibility, but do dampen the noise a little. However, we knew this from its predecessor and at least, with the Sports exhaust engaged, it’s still got a characterful enough sound signature that means it emits a noise like little else. It still produces the 911’s trademark bassy, raspy bark.

The standard Carrera coupe gets to 0-62mph in 4.2 seconds, or four seconds dead with the optional Sport Chrono pack fitted; opt for the Carrera Cabriolet and its 4.4 seconds to 62mph, or 4.2 with Sport Chrono. Top speed ranges from 179 to 182mph, depending on bodystyle and driven wheels.

Thanks to PDK’s launch control, the 0-62mph sprint takes just 3.7 seconds in the rear-wheel drive Carrera S. This drops by 0.2 seconds if you go for the Sport Chrono pack. Go for the 4S and those times stand at 3.6 and 3.4 seconds respectively, while top speed is 191mph for the 2S and 190mph for the 4S. Cabriolet models take a marginal performance hit due to their added weight.

The Turbo S model features a new 3.7-litre twin-turbo flat-six engine that generates 641bhp and 800Nm of torque. It sends its power to all four wheels through a new eight-speed dual-clutch gearbox and, with launch control, the car will bolt from 0-62mph in 2.7 seconds before reaching a top speed of 205mph.