The Cayenne is a premium SUV so running costs will be high; look to the hybrid models for improved value

The list price of Porsche Cayenne models is stiff, but they’re pretty evenly matched against the Range Rover Sport, which is one of the model’s key rivals. However, while the Range Rover Sport comes comprehensively equipped, the Porsche approach is to tempt you with exotic sounding performance and luxury options that can rapidly escalate your financial commitment.

The Cayenne need not be expensive to run or tax, though. Opt for the plug-in E-Hybrid model and you'll be paying a company car BiK rate of just 22%, while the maximum 22-mile electric-only range should enable many to complete their commutes without using a drop of fuel - as long as charging facilities are present and correct at work and/or home. Fuel economy for the E-Hybrid is officially pegged at 72.4mpg and, while you'll likely get closer to half that figure in the real world, it's still an impressive return for such a large and fast car. The E-Hybrid is also marginally cheaper to buy and more powerful than the Cayenne S.

The standard, single-turbo 3.0-litre V6 petrol Cayenne delivers claimed economy figures of 24.1mpg on the combined cycle and CO2 emissions of 265g/km. Move up to the twin-turbo 2.9-litre Cayenne S and the figures indicate a minimal penalty, with over 23.9mpg and 267g/km CO2 claimed, but anyone who buys a Porsche of any kind with a view to utilising its performance potential is going to struggle to meet the official numbers. 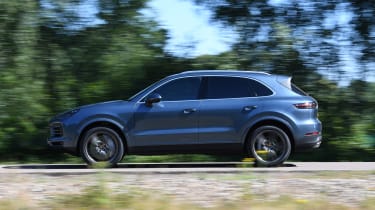 That’s especially the case for the 4.0-litre twin-turbo V8 Cayenne Turbo, which has a combined cycle test figure of 20.8mpg. This would be easy to halve if driven with gusto. The 309g/km CO2 figure ensures the Turbo joins the rest of the line-up in the top 37% Benefit in Kind bracket for company car drivers, but it’s a significantly worse performer from an environmental perspective. For power and efficiency, the Turbo S E-Hybrid offers up to 58.9mpg and 110g/km of CO2, along with a colossal 671bhp from its Turbo V8 and electric motor powertrain.

The standard, S and E-Hybrid Cayennes sit in insurance group 44, so expect big bills for cover. Opt for the Turbo and premiums will be even pricier, as the range topper sits in Group 50; no higher insurance group exists.

Used values for the Cayenne range remain fairly strong, with an average of 50% retained over three years and 36,000 miles. There's not too much difference between the standard SUV and Coupe models, although it's probably best to avoid the Turbo S E-Hybrid versions, as expert data suggests they will only hold onto around 42% - a big drop from their £120,000-plus list prices.