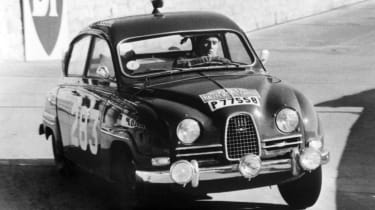 When the prototype 92 was unveiled by Saab in 1947 it looked as though the Martians had landed – here was a car that was aerodynamic with enclosed wheels, flush-fitting glass and faired-in headlamps. It was no coincidence that Saab’s roots were in aviation, so the company’s appreciation of the value of good aerodynamics was well ahead of just about everyone else.

By the time the 95 and 96 production models appeared the wow factor wasn’t quite so evident, but there was still plenty to recommend these quirky machines from Sweden. Looking like nothing else on the market, the Saab 95 and 96 borrowed much from the 92 prototype, and while they weren’t quite as far out, they were still among the most aerodynamic cars available.

Both models featured some brilliant design details – such as the third row of (rear-facing) seats on the 95 which when in place turn the car into a genuine seven-seater, but drop into the boot floor when they’re not needed. And the safety thing isn’t new, with seatbelts fitted from 1962 and dual-circuit brakes from 1964.

Parts availability is good, these cars are practical (especially the seven-seater 95) and the driving experience isn’t at all bad. Throw in the rarity and it’s the perfect car for those who want something unusual but not temperamental or too valuable.

V4 cars are much easier to get hold of (and get bits for) than the two-stroke cars. But many parts are interchangeable between the two, which makes it easier to keep a two-stroke car on the road.

There’s not much difference in values between 95s and 96s or two-stroke and V4 models. If you fancy taking a 95 or 96 on as a restoration project it’s possible to buy a basket case surprisingly cheaply. The most valuable 96 is the two-stroke Sport (known as the Monte Carlo in the US) but you probably won’t find a good one of these too easily.

When shopping look for a few upgrades. Original Autolite carburettors swapped for a single-choke Weber carb is a good thing, along with a manual choke conversion. A more efficient radiator and electric fan are also worthwhile, as is a diaphragm clutch conversion to take the pressure off the under-engineered gearbox.

• Corrosion: most panels rust, apart from the bonnet. Focus on the front inner wings above the suspension mounts, the outer wings around the indicators and the door skins. The sills can also rot, especially down the seam that joins the inner and outer sill to the floor.

• More corrosion: rust at the base of the windscreen is tricky to repair. The inner rear wheelarches also rot, along with the boot floor, the side panels where the rear mudflaps mount, the rear suspension mountings and the slant panels/inner wings at the rear. Also check the top of the rear wings under the rear window.

• Even more corrosion: 95s corrode along the top edge of the roof, the rear wheelarches and the area around the bottom of the tailgate. All the brightwork on the rear of a 95 is extinct and the rear door has been known to split in half.

• V4 engines: V4 engines usually need a rebuild after 100,000 miles. The fibre balance shaft gear strips after anything from 50,000 miles; steel replacements are available. The balancer shaft bearings also wear, so see how much vertical play there is in the fan belt pulley.

• Early V4 engines: the earliest V4 cars (1967/8) used a different incarnation of the engine, with different heads and plugs, and it’s not possible to swap bits between the two types.

• Cooling: early Bullnose cars (with the radiator behind the engine) and all V4s can have cooling problems – the Bullnose has a combined dynamo and water pump but it’s worth fitting a more efficient radiator and electric fan to any 95 or 96.

• Transmission: gearboxes are weak on 95s and 96s, so lots of TLC is essential; 6000-mile oil changes are key. But the battery tray gets in the way of the gearbox filler plug on RHD cars, so many are neglected.

• Gearbox: gearboxes last up to 100,000 miles, the first sign of problems being when the freewheel stops working. Post-1974 V4s had a stronger gearbox; gear selection problems can be just a matter of adjustment at the steering column or a worn universal joint in the linkage. Vibration through the steering is likely to be inner drive-shaft wear – swapping the driveshafts over is normally the best cure for this.

• Rear suspension: 95s have lever arm dampers at the rear and they leak, so check them. The single bush which locates the U-shaped rear axle goes soft while the front suspension bushes wear.

1960: The 95 (estate) and 96 (saloon) debut at the London Motor Show but don’t go on sale in the UK for another two years. There’s an 841cc two-stroke three-cylinder engine and a three-speed gearbox (a four-speed is optional until 1966 when it becomes standard).

1962: The triple-carbed Sport appears, successor to the Gran Turismo 750 introduced in 1960 for the Swedish market.

1966: The Sport becomes the Monte Carlo to celebrate Erik Carlsson’s outright win of the famous rally.

1965: A facelift means the characteristic bullnose is lost. From the A-pillar forward the panelwork is all new.

1967: The two-stroke engine is replaced by a 1498cc V4 unit. Based on the unit fitted to Corsairs and Transits, balancer shafts make it smoother. Front disc brakes are also now fitted.

1976: Saab stops importing the 96 to the UK, and 150 examples of the metallic burgundy Souvenir models are made to mark the end of UK sales.

These delightfully quirky Swedish cars are brilliant fun, and relatively straightforward to own. They’re also pretty affordable, although some of the rarer, more special models command a significant premium. If you’re looking for the cheapest option, then a usable V4-engined car might start from £1500, moving up to £4500 for a mint example.

An original two-stroke is a much rarer option, and although rough examples are available for around £1500, the nicest will cost you more than £6500. 96 Sport and Monte Carlo models are highly prized and cost in excess of £10,000.