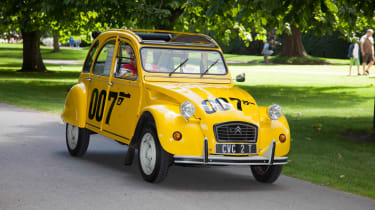 Bond can’t always rely on a glamorous supercar and Q’s clever gadgets to get him out of a sticky situation. When Bond (Roger Moore) and Melina Havelock (Carole Bouquet) are chased down a Spanish hillside by hired assassins, they have only a humble Citroen 2CV at their disposal.

Despite its unlikely credentials as a getaway car, plus a number of spectacular off-road excursions, the bright yellow machine manages to shake off a pair of pursuing Peugeot 504s, which boast far more power and grip.Yet there’s more to this classic Citroen than meets the eye.

The 2CV was also one of the only Bond cars to spawn a roadgoing version. Launched to coincide with the film’s release, the special- edition model was finished in the same yellow paint scheme and featured 007 logos on the doors and bootlid, plus a smattering of stick-on bullet holes. It’s now highly prized among 2CV enthusiasts, with mint examples fetching as much as £5,000.