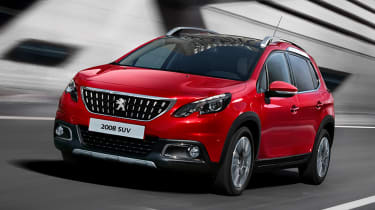 Peugeot has expanded the 2008 line-up with the addition of a new trim level, serving as a new range topping version of the firm’s Renault Captur rival.

The 2008 is now available in Allure Premium guise, boasting additional standard equipment compared to the standard Allure model. Priced from £18,645, it’s £800 more expensive than the previous bookend of the range, though Peugeot claims it has crammed an additional £1,400 of equipment in.

While it’s based on the Allure, the 2008 Allure Premium more or less gets the same kit list of the GT Line model. As such, the seven-inch colour touchscreen infotainment system boasts satellite navigation and voice control functions, while buyers also get Peugeot CONNECT telephone assistance. A reversing camera is also linked up to the system.

Outside, the 2008 Allure Premium gets coloured coded door-mirrors and handles, plus a rear sports spoiler, tough looking front and rear scuff plates, plus wheel-arch extensions and roof bars. 17-inch alloy wheels are included.

Two engines are offered – one petrol and one diesel. The 1.2-litre PureTech 82 petrol unit represents that £18,645 starting price, with claimed fuel economy of 57.6mpg and CO2 of 114g/km. Elsewhere, the BlueHDi 100 diesel is a much pricier option at £21,155, though it should be cheaper to run, Peugeot claiming 76.3mpg with 97g/km CO2. The new model is being offered with a dealer deposit contribution of £1,500, when bought on a monthly PCP scheme.

Does Peugeot need to offer more higher spec models like the 2008 Allure Premium? Tell us your thoughts...