There were dozens of top-line car launches in 2019, but there’s no doubt what the biggest arrival was, based on your feedback and the number of you that visited our pages on autoexpress.co.uk. The reborn Land Rover Defender was clearly our star of 2019. Now, with the 90 and 110 models on sale priced from £40,000, it's time to see how the new Defender goes down with the people who really matter, the car buying public.

The design and engineering teams at Land Rover had an unenviable task when setting out to create a new Defender. The model had been at the heart of the brand ever since it was the basis for the firm’s creation in 1948. And while production of the ‘original’ Land Rover ended in 2016, Jaguar Land Rover boss Ralf Speth called it “the saddest moment of my life”.

As such, the crowds clamoured onto the Land Rover stand at the Frankfurt Motor Show to witness the return of the iconic nameplate. And at precisely 10.05am on Tuesday 10 September, the music blared, a ramp folded down from the top of the stage and a Defender 110 drove down it. There had been leaks beforehand but even so, the accompanying applause as the covers came off was loud and long. 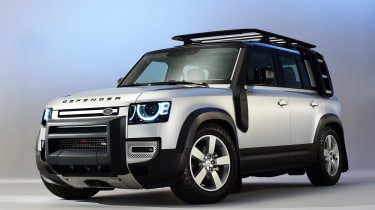 Standing beneath the stunt was Gerry McGovern, Land Rover’s Design Director and a man with a long history of ‘new Defender’. “When I was in the Rover Group originally in the eighties and nineties, there was talk about new Defenders then,” he recalls. “When I came back in 2004, they were still talking about it. I was one of the people that decided to bring it back, but it had to be at the right time, because we had to get everything sorted out first.”

The stakes were, and are, enormous. Full-fat Range Rovers and Evoques bring in the cash – but their credibility and authenticity are wrapped up not in the car parks of Chelsea but the fields, beaches and jungles the Defender calls home. So the all-new model had to not only encompass modern design techniques and fuel efficiency but also retain a utilitarian focus.

McGovern acknowledges the expectation, without ever coming close to admitting that it troubled him. “Was I apprehensive about it? No, because I don’t think that way,” he says. “I think everything we do is a challenge and you’ve got to take the positives from it. The right way to describe it would be excitement rather than trepidation.”

These pictures show how much the icon has evolved. Because, McGovern points out, it had to. 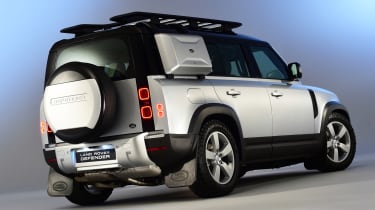 “I often have conversations with traditionalists and they’ll say, ‘Oh, don’t change it, just make it like it is.’ But it wasn’t relevant any more. That car, great as it was, was designed for a different time. People were smaller and the amount of comfort people expect in their cars has changed. But it’s a fact that this is the toughest and most capable Defender ever made.”

The car in our pictures is a 110, the five-door version of the new model. The three-door 90 is now also on sale and a Defender commercial vehicle variant will follow, if leaked internal documents are to be believed, a longer 130 model with extra load capacity beyond the sixth and seventh seats, is also in the pipeline.

Despite the evolution, the new car’s profile is unmistakably Defender, with the distinctive bonnet and strong roofline, not to mention the spare wheel sited on the side-opening tailgate. This alone presented an engineering challenge, in fact, because the larger wheels being offered on the new model required new structural capabilities. 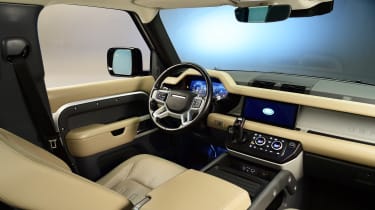 Inside, the Defender gets a sophisticated new electronics architecture that offers the latest smartphone connectivity, but is also future-proofed by over-the-air upgradability. The dominant feature on the fascia is the central, exposed magnesium crossbeam – a structural component which, Land Rover claims, you could use to move the car if you tugged it hard enough. It’s more likely to be useful because of its integrated grab handles.

The engine line-up comprises two petrols, one with mild-hybrid technology, and a couple of diesels. The P300 is the regular four-cylinder petrol, with 296bhp, while the bigger sellers are likely to be the D200 (197bhp) and D240 (237bhp) diesels. The hybrid is the P400, which has a straight-six turbocharged and supercharged petrol engine.

Early feedback from potential customers has already persuaded Land Rover to tweak the line-up. In particular, demand for the retro-look 18-inch steel wheels extends far beyond the entry-level edition of the car on which they are offered – so engineers are working on larger ‘steelies’ that can be available to buyers of S, SE and HSE models.

Even so, Land Rover is confident that it has enough accessories to appeal to almost every taste. The options include everything from a side ladder to a roof tent, and four core packs will be available to give every Defender a distinct flavour – from extreme off-roader to urban runabout. 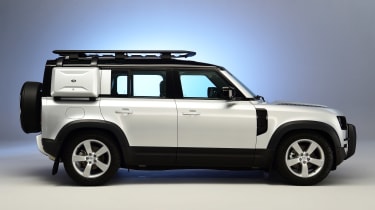 The new Defender is unrecognisable when it comes to technology. A suite of driver-assistance systems, connectivity features and infotainment displays makes it one of the most technologically advanced models Land Rover has ever produced. There’s also a new remote app which allows owners to pre-condition the Defender via a smartphone.

The latest tech was revealed at the 2020 CES show in Las Vegas. A first in the automotive industry, the dual-eSIM, dual modem connectivity enables the infotainment system to simultaneously perform entertainment functions like music streaming and app usage with over-the-air update downloads without any appreciable loss in speeds.

The tech, which is “always on” (courtesy of a back-up battery) is paired with a new 10-inch Pivi Pro touchscreen display which shares much of its hardware with the latest smartphones including two Qualcomm Snapdragon 820Am processors. The system also allows two Bluetooth devices to be paired simultaneously. The infotainment setup uses Blackberry’s QNX operating system, as does the car’s customisable digital driver’s display.

Land Rover has also teamed up with Bosch to deliver the latest version of the brand's 3D surround-view camera system. A range of 190-degree wide-angle cameras and 14 ultrasonic sensors allow the driver to display a wide choice of vantage points on screen, which can be used to create a virtual pan around the outside of the vehicle. Here are the other highlights... 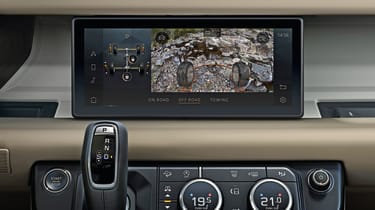 Part of a 3D surround camera system, the tech allows you to see ‘through’ the bonnet when off-road. 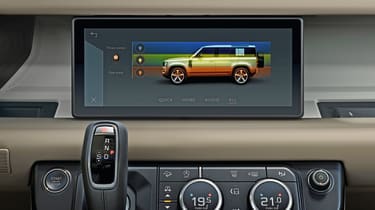 Owners are able to configure the lighting in the Defender’s cabin to match their mood or driving style. 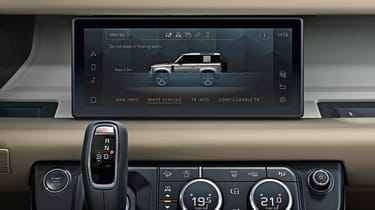 Defender has a wade depth of 900mm. Display graphic indicates how close to maximum depth Defender is. 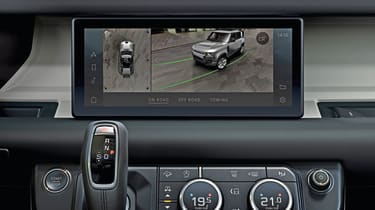 The task for Land Rover and its design chief Gerry McGovern was to create a car that was ‘modern and relevant’. One thing that had to be taken into account for the latest Defender that was never considered for the original model was safety and technology. Despite the plethora of safety legislations that had to be met, especially in the USA where the Defender will be sold for the first time, the SUV is clearly identifiable as a Defender.

McGovern said “the silhouette is a modern interpretation of the original”. The circular LED headlamps are another nod to the original. The cabin, however, is a major step up and laden with tech, while a solid magnesium brace and exposed screws add a rugged touch to the interior. 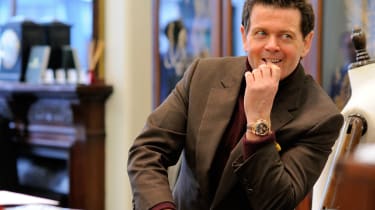 McGovern is the man responsible for the British firm’s look. Auto Express sat down with him to get his take on what it’s like to recreate an icon

Q: What was your initial reaction when the project was given the green light?

A: “I was one of the people that decided we’ll bring it back. Was I apprehensive about it? No. More excited about doing it rather than feeling any trepidation.”

A: “For me the focus had to be ‘who are the people who are going to buy this car?’. For me, it is a new generation and, clearly, I’d love the traditionalists to turn around and say it’s great ��� but this has to appeal to a new generation as well.”

Q: Talk us through the design process. Was it fluid?

A: “No matter what people say, the process is never quick or fluid. The challenge for designers and engineers was, how do we create a vehicle that is modern and is relevant to a world that has changed massively from when the original was created.”

Do you think the new Land Rover Defender is a worthy successor? Let us know your thoughts below…

The new Land Rover Defender is one of the most anticipated new cars in a generation, and it doesn’t disappoint
New 2021 electric Hyundai 45 SUV spied for the first time

Racy new Skoda Kamiq Monte Carlo SUV to be priced from £23,305, with first deliveries to start in Spring