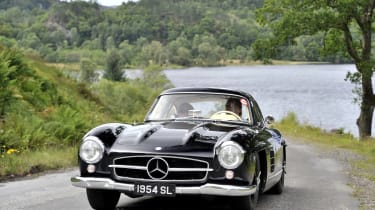 The Mercedes-Benz 300SL came about in the wake of the company’s Le Mans and Carrera Panamericana victories in 1952. Keen to capitalise on those successes as much as possible. Developing the car into a road-going tour de force was a masterstroke; upon its unveiling at the 1954 New York Motor Show, the 300SL ‘Gullwing’ caused a sensation.

Not only was its top speed around twice that of the typical contemporary family saloon, but it was also the world’s first production car with fuel injection. Officially known as the 300SL Coupé, the Gullwing survived until 1957, with 1400 built before the Roadster replaced it.

Often criticised for its unforgiving rear suspension, you could easily end up leaving the road backwards if you unsettled a coupé mid-bend. That’s why the Roadster’s rear suspension was improved significantly; the swing axles remained, but with a lower pivot point, while a transverse coil spring helped when the car was being cornered hard.

As a result it’s more forgiving; the open-topped cars are also more plentiful as 1858 were built by the time production ended in 1963.

Which Mercedes-Benz 300SL to buy?

Although they’re closely related, there are more differences between the Gullwing and Roadster than you’d think; they’re very different to drive which is why they’re often bought in pairs. While British and American owners strive to keep their cars original, the Germans aren’t so bothered.

As a result, quite a few Gullwings now have a five-speed gearbox along with disc brakes – there’s even one with anti-lock brakes. The Roadster and Gullwing have the same engine, but owners could choose between two states of tune. In standard form there was 215bhp, but a raised compression ratio and spicier camshaft boosted this to 250bhp and 228lb ft of torque.

Also, while most cars featured an alloy head and cast-iron block, the final Roadsters got an all-alloy unit; some Gullwings now have this lighter unit, although none came off the production line so equipped. Refreshingly, condition is no bar to purchase, as the high values mean no car is beyond saving.

German specialist Kienle Automobiltechnik works with the factory to provide parts, while Mercedes can help with anything from fresh parts to a complete restoration. So while the 300SL is extremely costly, it’s still one of the safest places to put your money.

The Mercedes 300SL in racing

Heavier than its racing predecessor, but also more powerful, the road-going 300SL arrived in time for the 1955 season and was soon mixing it with Ferraris and Alfa Romeos in the Grand Touring categories. Although the Mercedes factory never entered works cars, it offered generous support to its many private owners.

Frequently overlooked in the light of Moss and Jenks’ record-breaking 1955 Mille Miglia victory in the 300SLR is John Fitch’s fifth place overall and win in the GT category. 300SLs also placed seventh and tenth. 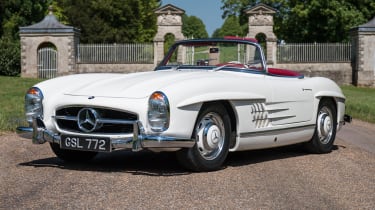 The Grand Touring category was even more hotly contested in 1956. Another victory came in the Liège-Rome-Liège Rally, this time for Willy Mairesse. The Acropolis and Sestriere rallies fell to the SL, and Stirling Moss brought one home second in the Tour de France.

In the USA, which was the Gullwing’s most important market, Paul O’Shea won the Sports Car Club of America Production Class D championship in 1955 and 1956, with Class C victory going to Harry Carter in 1957.

Inevitably, with no further development by the factory, the magnificent Mercedes 300SL was gradually outclassed as the field moved on. But what a legacy it left behind.

• Corrosion: rot is rarely a problem, with most 300SLs at least part-restored by now. The spaceframe chassis can corrode, but never enough to cause significant problems. The most likely issue is corrosion that’s difficult to repair without removing the bodyshell, as this increases restoration costs, although most owners prefer to go for a body-off rebuild anyway. Letting in fresh chassis sections is easy enough, but look for evidence of poor crash repairs, with the frame out of true.

• Undertrays: all 300SLs featured undertrays to improve aerodynamics; they also stop everything underneath getting caked in crud. Some owners prefer to leave the undertrays off, but it’s not advised; if you buy a car without them, they can be remade.

• Steel bodies: a lot of the body panels are aluminium, including the doors, bonnet, boot lid and sills, but the rest of the structure is steel, although 29 coupés were made with all-alloy bodyshells. There are few weak spots on a steel-bodied car; the front valance and rear wheelarches are the areas most likely to give problems, along with the blisters over the wheelarches.

• Engine: derived from the 300D straight-six, the 300SL’s 3.0-litre engine is smooth, refined and durable, if the fuel injection is working properly. Problems often stem from a lack of use; the injection pump’s pig-skin diaphragm perishes, leading to over-fuelling and consequent washing of the bores. Stale fuel leads to clouds of black smoke when the engine is started.

• Cylinder head: it’s usually possible to rebuild everything, including the engine and all ancillaries. An alloy head means maintaining anti-freeze levels is essential, to prevent internal corrosion. It’s possible to get the head’s waterways sealed, to ensure the metal doesn’t become porous. 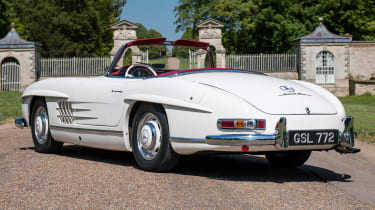 • Gearboxes: there were differences between Gullwing and Roadster gearboxes, the former having semi-straight-cut gears which produce more whine than you’d expect; the Roadster’s all-synchro unit is much quieter. Both types are very strong, with nothing more than bearing wear likely, although gearlevers can fall out when the nylon bush at the base of the stick wears out. Repairs are cheap and easy though.

• Clutch: don’t under-estimate the cost of replacing a clutch if you want to maintain originality. Genuine clutches can be temperamental, wearing out quickly. A new three-piece clutch kit is available, but some owners fit a modern diaphragm unit that’s easier to use and much cheaper.

• Rear axle: there were five rear axle ratios available, ranging from 4.11:1 for ultimate acceleration, to a 3.25:1 unit if relaxed cruising was more in order. All rear axles are strong, with worn bearings and gears the most serious likely fault. As a result, a bit of whine is common. Gullwings got a limited-slip mechanism.

• Steering: the recirculating ball steering differs between open and closed cars; there are two turns between locks for the Gullwing, but three for the Roadster. Neither box gives problems, so just check for excessive play. Mercedes didn’t offer right-hand drive 300SLs but a tiny number of cars were crudely converted in period.

• Brakes: in 1961 the Roadster got disc brakes all-round, in place of the previous finned alloy drums. Fitted with a steel insert where the shoe makes contact, the drums can distort. It’s usually possible to skim the drums or fit a new insert, but if things have deteriorated too far you might have to buy replacement drums.

1952: 300SL racers notch up multiple victories around the globe.

1953: US Mercedes importer Max Hoffman persuades the factory to build a road-ready 300SL.

1958: A hard top is now offered; as a result, the Roadster can be ordered without a folding roof.

1961: Disc brakes all round replace the drums previously fitted.

Gullwings have sat near the top of the market for decades, and although it doesn’t look like it will change any time soon, the increases have certianly taken a breather for now. For a top example, expect to pay up to £1m, although you might be able to find an example in need of some restoration work for from £575,000-675,000.

Some models may fetch more money if they have rare options fitted, and the 29 alloy-bodied versions are up to four times more expensive. The Roadster versions were built in slightly higher numbers, and prices are slightly lower. Around £750,000 represents the top of the market, although more ordinary cars can be had for £275,000-£395,000. Projects start from £200,000.