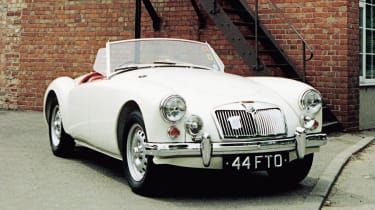 MG has made some cracking cars since it set up in business in 1924. Arguably the best-looking of them all is the MGA, which ushered in a new era for the Abingdon-based company when it replaced the ancient T-Series in 1955. Sleek and beautiful, the MGA isn’t the fastest sportscar around, but it is superb to drive thanks to its agility, lively performance, sweet gearchange and light steering.

To look at the MGA, you'd never guess that under the relatively modern and sleek exterior sits many of the same mechanical parts as the TF, including the 1489cc B-Series engine and four-speed gearbox along with drum brakes all round. It's this technical simplicity that really makes the TF a joy to own.

Now the MGA has been out of production for many decades, it’s well served by clubs and specialists that make the owning process that much easier. With a lively social scene and ready parts availability, whether you’re buying your first classic car or adding to a collection, the MGA makes a huge amount of sense.

It's amazing just how good the parts availability is, with many companies out there specialising in reproducing many of the interior trim items and mechanical parts that wear out over the years, making restoration generally very easy.

Which MGA to buy?

There are more choices to make than you might think, as there were 1500, 1600 and Twin-Cam engines along with roadster and coupe bodystyles. Open-topped MGAs are worth a lot more than their closed counterparts, but there’s little difference in values between the 1.5 and 1.6-litre editions. The Twin-Cam fetches a lot more, but they’re also far rarer and running costs are much higher too, particularly if you need to undertake an engine rebuild.

Because roadsters are worth more than coupes, they tend to be the subject of the best restorations – which is why finding a truly superb coupe can be a thankless task. It doesn’t help that restoring a closed car also costs significantly more than reviving an open one.

Just 6,000 MGAs were sold new in the UK, of the 101,082 cars built – more than 80,000 went to the US. A lot of left-hand drive MGAs have now been converted to right-hand drive and these cars can be worth less than genuine UK models. However, the conversion is straightforward and there’s no need to mess with the bodywork (a new dashboard, steering rack and pedal set is all that’s needed), so problems are unlikely.

Finding an original unmolested car might be a bit more of a problem though, as the vast majority of MGAs have undergone some modifications, replacement mechanical components such non-matching engines or upgrades. This isn't a problem if you're looking for a car to enjoy, but as a collectors' item, finding a completely original and matching numbers MGA is often a difficult task.

If you’re buying a project tread very carefully. These cars are more complicated than you might think, especially the bodywork,  and restoration on an amateur basis can lead to disaster – but buy a good MGA and you’ll never look back.

• Corrosion: if buying an ex-California car that was imported years ago, don’t assume it’s still rust-free, as many such cars are now rotten. Start by checking the sills and A-posts which are tricky to repair. The wings rot too and while replacements are available they’re tricky to fit. Also check the door bottoms and boot floor.

• Damage: accident damage isn’t rare, so check the panel gaps, the panels for rippling and the chassis too. A sharp knock will distort the chassis beyond repair, so analyse the front and rear chassis legs for distortion.

• Engine: the B-series engine is easily rebuilt and durable if maintained; used replacements are easily sourced too, if not necessarily from another MGA. Look for blue exhaust smoke signifying wear and expect oil pressure of 50-60psi at 3000rpm.

• Cylinder head: cylinder heads can crack, leading to coolant loss and overheating, so check for signs of a blown head gasket.

• Leaks: oil leaks because the scroll oil thrower on the back of the crankshaft wears, as does the block that it acts upon. Once worn a new block and crank could be needed, but an oil seal conversion is an option.

• Twin-cam engine: the twin-cam engine is fragile and very expensive to rebuild; everything is unique to this powerplant. Amateur rebuilds can create all sorts of problems, so see who has done any maintenance.

• Transmission: because the gearbox is weak, most have been overhauled already, often with used parts which leads to premature failure. Check second gear synchro for baulking and listen for chattering in first and reverse.

• Drivetrian: diff casings get damaged when the hub nuts are left loose. They need an eight-sided 1 61/64” socket which is unusual – but available. Loose nuts lead to the bearing spinning against the axle casing, damaging both, so look for signs of the diff leaking oil onto the brakes.

• Suspension: cheap rear springs are common; they provide the wrong ride height, destroying the ride and handling. Sometimes 10-inch springs are fitted up front, in place of the correct 9-inch items. These spoil the handling too.

• Wheels: the steel wheels can crack around the mounting holes, while wire wheels can suffer from worn splines and rusty spokes. Some owners fit 72-spoke wheels, when the narrower 60-spoke items look more authentic.

1960: The 1600 De Luxe appears, while the twin-cam is killed off. The De Luxe uses the Twin Cam’s chassis, with disc brakes all round; this is now the most sought after A after the Twin Cam.

1961: The 1600 MkII arrives, offered as a roadster or coupe in standard or De Luxe specifications.

For what is actually quite a desirable and iconic British sports car, the MGA is actually still relatively affordable. While projects are a bit of a risky proposition, £3000-£4000 is enough to find a coupe, while roadsters tend to cost about £6000-£7000. While some prefer the coupe's looks (and stiffer body) there is a tough decision to make, as a roadster is much cheaper to restore than a coupe, and will be worth more when it's done, making quality coupe restorations harder to justify.

Cars that perhaps require a little bit of fettling, but not quite a full restoration, then budged upwards of £8000 for a coupe and £12,500 for a roadster. You should obviously use caution while looking at cheaper cars, especially coupes, as could end up needing a full restoration anyway due to poor quality work.