Our verdict as we get behind the wheel of the latest 992 version of the legendary Porsche 911 for the first time...

We haven’t fully road-tested the latest 992 version of the Porsche 911, but all the signs are that it’s both a better GT and a better sports car than its predecessor. It feels more polished and more rewarding to drive, with superb steering and outstanding brake feel. Grip and poise are substantially improved, too. Some design details rankle, but it looks like this new 911 will stay firmly at the top of the class when it arrives in British dealerships in the coming months.

The code number may have changed by just one digit, from 991 to 992, but make no mistake: the eighth-generation Porsche 911 you see here is an almost completely new car.

It has an all-new, aluminium-intensive body, a new interior and a new, eight-speed PDK automatic gearbox. And while the twin-turbo flat-six shares its basic dimensions with the unit found in the outgoing 991, it has been thoroughly overhauled, resulting in power jumping 30bhp to 444bhp.

The surprise is that, even though the body is a few kilos lighter and almost everything else is new, the 992 is 50kg heavier than the old car. There are a few reasons for this, says Porsche. The first is that, to make it even cleaner, the new 992’s exhaust has a Gasoline Particulate Filter (GPF), which adds a hefty 15kg. 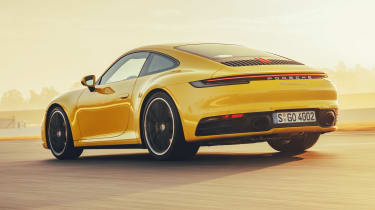 Secondly, the extra eighth ratio in the new PDK box makes it a heavier unit, then there are bigger rear wheels, and there is a little weight gain from the car’s upscaling, too. Yet despite all this, the uplift in horsepower ensures that the power-to-weight ratio is up.

Sitting in the pitlane at the Hockenheim circuit in Germany, the 992 looks chunkier and more square than the 991, yet sharper, too. And it’s still unmistakable as Porsche’s evergreen sports car – from any angle.

Some details such as the pop-out door handles and the 3D, sushi-like PORSCHE letters on the tail do appear a bit fancy, and there’s quite a lot of black plastic on show in the gaping mouth and vented rear apron, but overall it’s a good-looking car. 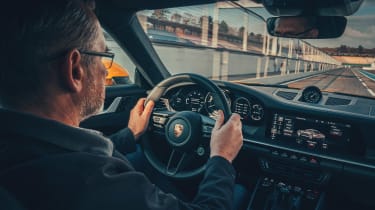 It’s easy to miss the fact that, for the first time, the front and rear wheels are different diameters: 20 inches at the front and 21 inches at the rear. Factor in totally revised adaptive damping with a more compliant softest setting, a wider front track (+45mm) to go with the wide-body rear – there is no narrow body option like there was before – and you do wonder if the 992 will feel less like a traditional 911 to drive than any previous generation model.

The all-new interior looks familiar, but only at a glance. The only analogue dial is the large, central tacho; the flanking TFT screens create the rest of the dial spread and are supplemented by a large central touchscreen. While the latter doesn’t do away with all the hard keys, the sides of the centre console gleam with button-less lustre. The 992 goes keyless as well, although it has a twist switch rather than a conventional starter button as you might find in a BMW or Jaguar.

It’s a beautiful place to sit, in fact, and feels worthy of the car’s £93,110 list price. Of course, at a later date Porsche will add even more expensive variants in the form of GTS, Turbo and even hybrid models, as well as the famed GT3, GT3 RS and GT2 versions. An entry-level Carrera is planned as well. 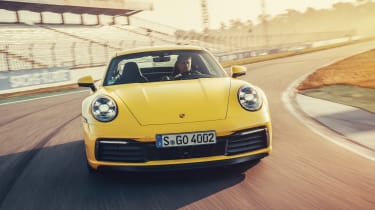 We tried a rear-drive 992 Carrera S, as well as the four-wheel-drive 4S. The two were identical apart from the number of driven wheels, and although it was almost solely a track drive, we did manage a couple of gentle tours of the circuit’s perimeter to get a sense of refinement and how the car might feel on the open road.

The first bit of good news is that with the optional sports exhaust, the engine has a decent flat-six character and richness, despite the GPF which absorbs some of the engine tones. Even better, the steering is just superb. It has a quicker ratio and is very direct yet calm; it’s progressive until you make a fast input, at which point the car snaps to attention. The ride is quiet and compliant, the engine picks up well and quickly builds boost. The gearbox shifts are slick. It feels like a polished product.

The 3.0-litre twin-turbo flat-six has been extensively revised, with bigger turbos and cast intake manifolds, more finely controllable piezo fuel injectors and a totally updated charge cooling system, whose bigger intercoolers are now beneath the engine grille where they are more effective.

Gear ratios now start shorter and finish higher, and Porsche says that the 992 will cover 0-62mph 0.4 seconds faster than its 991 equivalents. The Carrera S completes the sprint in 3.7 seconds, while the 4S cuts this to 3.6 seconds. Around the Nürburgring Nordschleife, the 992 is five seconds faster, lapping in seven minutes and 25 seconds. The new car’s top speed is 190mph.

Race tracks often make road cars feel slow, but the 992 is genuinely quick. The power delivery builds to an encouraging vocal crescendo, while the shifts of the new PDK box at full throttle and maximum revs are seemingly instantaneous. 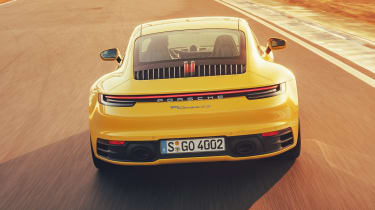 Any 911 feels great on track, but the grip and poise of the 992 are outstanding. Other aspects stand out, too: the connection and feel of the steering continue to impress, and the seats are, as ever, comfortable and offer superb support. The brakes are sensational   as well, not just because they’re carbon ceramic but because there’s a newly- developed composite pedal that’s stiffer, giving finer control and better feel. Cars with regular steel brakes should benefit, too.

There’s a tangible increase in the whole car’s focus and urgency as you work your way up the drive modes, although it’s only when you’re on the limit that the 992’s rear-engine weight distribution is revealed. We’d managed five or six ever-faster laps, and were amazed at the grip and, increasingly, the car’s composure beyond the limit – at which point we were swiftly reminded we’d been asked only to drive at “80 per cent”.

With the traction control and driver aids switched off, both the Carrera S and 4S will kick out and slide under power, yet if this is your thing then the rear-drive model is the one to go for. It’s more consistent, more transparent and more rewarding on (and past) the limit. But we reckon it’d be very hard to tell them apart in general road driving. While we wish we’d had time for a longer evaluation, a full road test is due in the very near future.