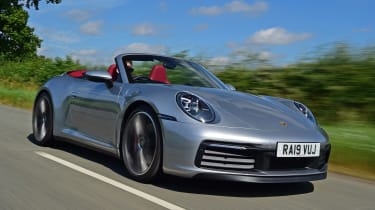 The Porsche 911 Cabriolet is a brilliant driver’s car and a superb grand tourer, mixing a wonderful chassis, huge performance and a luxury feel with the pleasures of open-top motoring. However, it doesn’t ride quite as well as the coupé and the slightly dull engine note – even with a sports exhaust fitted to the car – is rather more disappointing in this version.

With summer in full swing, many will consider the merits of a convertible – and we’ve been trying the new Porsche 911 Cabriolet for the first time in the UK.

The version we’re driving is the Carrera 4S, which currently sits at the top of the range in terms of price; and, at £108,063 without any options fitted, it’s got to be something special to justify that figure.

It gets off to a good start because the performance is astonishing. Even with extra chassis strengthening that adds 70kg over the coupé, the 4S Cabriolet can sprint from 0-62mph in a blistering 3.8 seconds, or 3.6 seconds with the (£1,646) Sport Chrono Package fitted.

On the road, it feels every bit as quick as that, and the turbocharged flat-six delivers stunning performance. It has 444bhp and 530Nm of torque, and the rear-mounted engine has enough mid-range grunt for effortless progress – yet you can also rev the motor hard to get the most out of it if you’re on a suitable road.

While the turbo engine is ruthlessly effective, it’s not very involving. It sounds gruff at low revs and, while it gets better as you rev it harder, the engine note is not the most exciting. That’s not such a problem in the coupé, but traditionally the Cabriolet version has been better for savouring a sweet exhaust note, and that’s not really the case here. Even the optional sports exhaust on our test car doesn’t improve things.

Still, lowering the hood is as much fun as it is in any convertible car. On a sunny day it’s great to have the roof open, and there’s very little buffeting in the cabin. You need only 12 seconds to take the canvas roof down, yet even when it’s up, refinement is still excellent; it’s very nearly as good as the coupé thanks to excellent soundproofing. 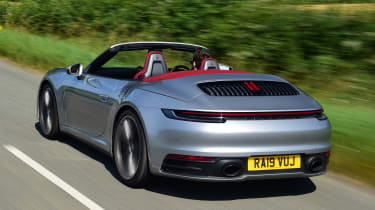 Just about the only area where it falls behind the hard-top version is in its ride quality. That’s more a reflection of just how good the damping is on the standard car, but there’s just a bit more movement over lumps and bumps in this Cabriolet. It’s most noticeable at low speed, but the chassis never feels out of its depth at higher speeds, even on really harsh surfaces.

The Cabriolet does retain the 911’s incredible handling, though. There’s a huge amount of grip and the steering is superb, offering enough feel and precision to allow you to place it exactly where you want it. Plant your foot when coming out of a corner and the clever four-wheel-drive system works out where best to send the power, increasing agility. But it’s so composed and capable that there is a limit to how much fun you can have on the road.