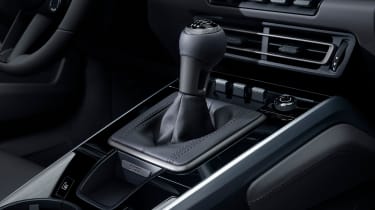 The Porsche 911 Carrera S and Carrera 4S can now be ordered with a seven-speed manual gearbox in the UK. The transmission is offered as a no-cost option, meaning the two cars retain their respective base-prices of £94,350 and £99,925. First deliveries are expected to arrive this autumn, after the current travel restrictions are lifted.

However, the new manual gearbox has impacted the 911’s performance. Porsche claims the seven-speed Carrera S takes 4.2 seconds to accelerate from 0–62mph, which is marginally slower than the automatic model’s 3.7-second effort. Despite this, both cars share the same 191mph top speed.

Porsche also says that the Carrera S manual is considerably lighter than the standard model, which should help offset the slower gearchanges. By swapping to a less complicated transmission (and losing a gear ratio), Porsche shaved 45kg off the 911’s kerb-weight.

Porsche has also expanded the 911’s options list for 2020, adding a range of technological and cosmetic extras. One of the additions is Porsche’s InnoDrive adaptive cruise control system, which can be specced as a £1,818 optional extra on models fitted with an eight-speed automatic transmission.

The InnoDrive system was first introduced on the Panamera and Cayenne – and, as with those cars, it can predictively set the 911’s driving speed for up to a mile in advance, based on traffic and road data gathered from the car’s navigation system. It will also automatically recognise corners, speed limits and roundabouts and adjust the car’s speed accordingly.

Porsche has also introduced a new nose-raising system, called Smartlift. Priced at £1,709, the electrohydraulic system increases the 911’s ground clearance by 40mm at the front axle, allowing it to crest speed bumps without damaging its splitter. The system can also save the speed bump’s location and automatically raise the suspension the next time the vehicle passes over it.

Are you excited to see the manual Porsche 911 Carrera come to the UK? Let us know in the comments section below…

With the 992, Porsche has broadened the iconic 911’s everyday appeal with greater comfort, while pushing the performance envelope further
Jaguar F-Type vs Porsche 911

Jaguar’s F-Type has usually come off second best when it’s taken on the Porsche 911. Can the newly facelifted car buck that trend?