New 469bhp flagship sports car promises to be the most thrilling 911 ever. We drive it 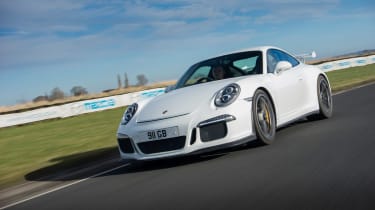 The new 911 GT3 is simply one of the best sports cars money can buy. With its breadth of abilities, it’s more accessible than ever, yet it still offers the track-inspired technology and driver engagement it’s famous for. Few cars, at any price, can match its performance and handling.

Since its launch in 1999, the Porsche 911 GT3 has been the benchmark against which every other track-focused car has been rated. There are more powerful, more expensive 911s, but the GT3 represents the sports car at its purest and most intense. In fact, all four generations of GT3 arguably rank alongside 1973’s legendary 2.7 RS in the annals of greatest 911s.

So we took the wheel of the 991-generation GT3 with a heavy dose of expectation – especially as Porsche says it’s started a new chapter in the car’s evolution with this fifth and latest model.

The famous motorsport-inspired Metzger engine has made way for an all-new 3.8-litre flat-six, while electric power-steering replaces the traditional hydraulic set-up, as in all other current-generation 911s. Most controversially of all, there’s no manual box – the GT3 is offered exclusively with a seven-speed double-clutch PDK set-up.

Yet Porsche promises that with the all-new engine, transmission and chassis, this model extends the breadth of the GT3’s abilities, allowing for more sophisticated day-to-day use, while retaining the driver engagement and track-bred handling it’s famous for.

The shell is 13 per cent lighter than the outgoing GT3’s, yet torsional rigidity is up by 25 per cent, plus power and torque are increased, bringing the totals up to 469bhp and 440Nm.

Turn the ignition key and the mechanical-sounding idle of the 3.8-litre Carrera S-based engine gives a clue to the raft of internal changes. Not many parts have been carried over, so lightweight forged components combine with a unique intake system, new cylinder head and dry sump lubrication to ensure the GT3 can cope with high revs and big lateral loadings. Porsche’s dynamic engine mount system is standard, too.

On the move, the upgrades are immediately apparent. With a short throttle travel, the engine is fast and incredibly free-revving. Power builds relentlessly and rapidly, taking a noticeable step up at 7,200rpm, and racing to the 9,000rpm red line. Acceleration from 0-62mph takes a seriously impressive 3.5 seconds. 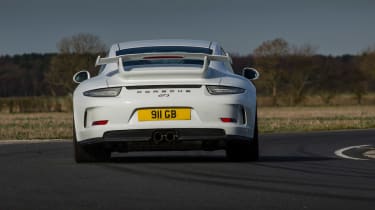 Better still, the standard sports exhaust delivers an evocative soundtrack. Pressing the exhaust button reduces back pressure – increasing torque by 35Nm between 3,000 and 4,000rpm – as well as upping the volume.

Good traction has always been a GT3 trait, and with the help of Porsche’s clever torque vectoring electronically controlled locking rear differential, the car punches out of bends with no intervention from the stability control.

Most importantly of all, Porsche has tailored the PDK box for the GT3. Shorter ratios mean seventh is a top speed ratio, not an overdrive ratio, while in manual mode there’s no kickdown or auto-creep, and the system won’t change up automatically. Shifts are even faster than in the standard 911, and downshifts slot into place equally quickly, aided by a large blip of the throttle.

Some drivers will miss the satisfaction to be gained from using a manual box, but the PDK is lighter, faster and more efficient. Crucially, the revisions also mean it contributes to the driving experience, rather than taking away from it.

And what an experience it is. The weight and speed of the electric steering are perfectly judged, the nose reacting with even more finesse and precision than in other 911s. There’s no perceivable roll, and the grip is hard to believe, so you can tighten your line on a balanced throttle through a long corner without fear of unsettling the car.

Yet despite the taut chassis, Porsche’s PASM active damper system is standard. And while the ride is firm, it’s not unbearable. Another first is the active rear-wheel steering. Instead of standard control arms, a pair of actuators vary rear wheel angle by up to 1.5 degrees – below 50mph in the opposite direction to the front wheels and above 50mph in the same direction. And while you can’t feel the system at work, the GT3’s low-speed agility and high-speed stability are proof of the set-up’s effectiveness. Porsche estimates that 80 per cent of owners will take their GT3 on a track, and while we didn’t get the chance to do so, the freedom of a race circuit is sure to show off the final layer of the car’s magic. It’s also the only place where you’re likely to need to put the PASM and PDK into their sportiest settings.

As before, the racy styling and sporty stance mark the GT3 out as something more than just another 911. It sits 30mm lower than a standard Carrera S, and its wider track and unique 20-inch wheels hint at its motorsport-inspired set-up. Extra cooling intakes, a deeper front spoiler and unique foglights set the nose apart, while the fixed rear wing is an unmistakable addition to the engine cover.

We’d love to finally get the GT3 on a track to see what it’s really capable of, but this drive already proves Porsche has created yet another legend. It’s not only faster and more capable than any past GT3, it’s also easier to live with.