Mixing supercar-baiting speed with day-to-day useability, the Porsche 911 is a tour-de-force in the performance car market 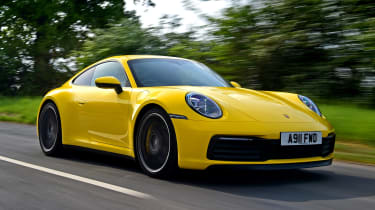 The new Porsche 911 has once again set the bar high by managing to broaden its appeal with greater comfort, while simultaneously increasing its performance credentials.

The latest iteration of Porsche’s evergreen sports car will of course be offered up in multiple guises in its lifetime. You can bet on a GT3 RS and GT2 joining the range soon, but for now the core line-up includes rear-wheel-drive Carrera and Carrera S models, available as Coupe or Convertible versions, with the option of upgrading to four-wheel drive. There's also the niche Targa model to consider, or the incredible Turbo and Turbo S variants.

As usual this new 992-generation 911 is an evolution of the previous 991-gen, rather than a wholesale revolution. That means a trademark 3.0-litre flat-six engine mounted closer to the rear axle, nullifying the traditional pendulum movement you used to get in 911s of old and ultimately improving the handling.

Thanks to turbocharging, the mid-range punch is excellent, with 530Nm of torque available from 2,300rpm to 5,000rpm, and there’s virtually no lag in the throttle response, either.

The interior is of a quality you’d expect of a near-£100k Porsche and there’s plenty of impressive tech on display. Porsche anoraks will notice the horizontal design of the dash echoing its ancestor’s roots and the layout is simple and easy to get used to. The 10.9-inch centred touchscreen works well, but it isn’t as large as in the Panamera or Cayenne. You can operate most of the functions from it, resulting in a decluttered interior.

There’s little better to attack an open road than the new 911, but it still feels equally adept at pootling around town - making it a stunning piece of engineering and our Performance Car of the Year 2019.