On the road in the reborn Renault Alpine Vision sports car 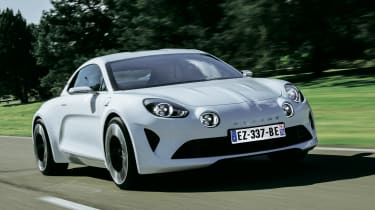 This was our first chance to sample the Alpine Vision on the move, and it certainly impressed us enough to have us looking forward to getting in the driver’s seat. The concept of the lightweight, agile sports car and the brand’s history could well be a success, provided that Renault finds the balance between affordability and exclusivity.

The Alpine Vision concept that Renault revealed at March’s Geneva Motor Show wasn’t just an empty shell; it was a roaring, racy powerhouse that promises to be one of the most beautiful things to come out of France on four wheels. Now we’ve had an exclusive opportunity to hear it, experience it and feel it from the passenger seat.

Renault’s designers have made only cautious references to the original Alpine A110. But the four headlamps, curved rear window and air outlets underneath clearly hark back to the 1962 model. 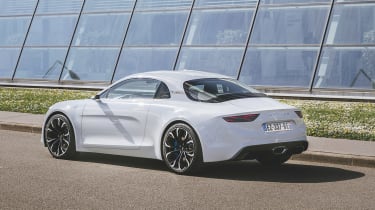 The newcomer is more than just a revival. It’s much wider, which makes for more room under the low roof. The interior has so many impressive details; it features a large TFT display in front of the driver, with the big shift paddles controlling the dual-clutch gearbox behind the steering wheel.

Behind the driver rests a mid-mounted four-cylinder turbo engine that delivers around 270bhp, making the Vision capable of 0-60mph in less than 4.5 seconds. That gives us a few basic points to work from, yet the French certainly aren’t ready to reveal any exact figures for the final production model – they’re still a state secret.

The Alpine sweeps through a 90-degree corner amazingly smoothly and quickly. The bassy exhaust note hits us in the pit of the stomach and immediately makes us lust after the driver’s seat. There’s still work to be done, yet it corners flat, feels composed and is a very promising preview into what is one of the most eagerly awaited sports cars.

It feels particularly light on its feet, and the fact that the power output is expected to be modest means the Alpine must only weigh about 1,200kg. Is that down to aluminium? “We’re in the process of putting together a lightweight design team that will support all Renault models in future,” Alpine managing director Michael van der Sande told us.

The key factor will be to find a balance between the building costs and the price tag. Initially, some people speculated that the reborn Alpine would be available for around £50,000, but this was probably just wishful thinking, because as Van der Sande explained: “It certainly won’t be cheap.”

The first models will be on sale in the middle of the year, and the sports coupe is just the start; Van der Sande isn’t excluding the possibility of an SUV.