We take to the track in the latest boundary-pushing race car from the Renaultsport stable, the crazy RS.01

At the moment the RS.01 is just an in-house folly for Renaultsport, a one-make racing car that just so happens to be utterly sensational to drive. But in time it may yet redefine what’s possible from a GT3 racing car. And whatever its future, the RS.01 looks, and indeed is, one of the most exciting cars we’ve driven all year.

As you may or may not know, Renaultsport has a rich history of producing wild and rather wonderful one-make racing cars. From the GTA Turbos of the 1980s to the Sport Spiders and rear-engined Clio V6s that followed, Renaultsport’s racing cars have always tended to be, well, just a little bit unhinged.

And this new mid-engined, 550bhp, 190mph RS.01 is no exception. Indeed, it may even be the maddest car yet to emerge out of the eccentric Renaultsport stables.

At the same time, though, the RS.01 also happens to be a drop dead gorgeous machine to look at, and beneath its jaw-dropping carbon fibre bodywork it is, in fact, a very serious racing car indeed. 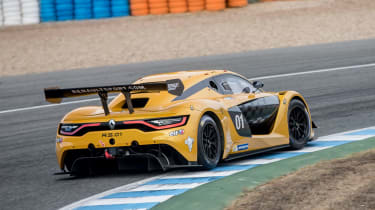 Like the bodywork that clothes it, the core of the car is made from carbon fibre and features a bespoke mono-cell tub with double unequal length wishbones at each corner, just like a proper Le Mans car.

The engine is a twin-turbo V6 with 550bhp that’s been lifted straight out of a Nissan GT-R road car, but then fitted with a dry sump to improve its lubrication and general efficiency when operating at high revs.

The seven-speed paddle shift, fully automated gearbox is also a bespoke item, built for the RS.01 by Sadev. A highly sophisticated transmission it is, too, featuring no manual clutch as such, which means you just flick the paddles up or down and the electronics take care of the rest, even when you come to a compete stop, at which point the anti-stall system takes over and the car selects neutral all by itself. 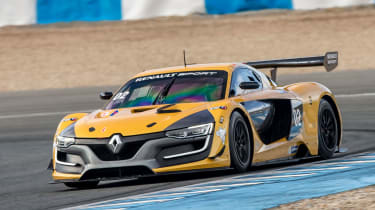 In total the RS.01 weighs a fraction over 1,100kg, but maybe its single most impressive technical feature is its aerodynamic package – because at its top speed of 190mph Renaultsport claims the RS.01 develops a cheek-rippling 1,200kg of downforce. A LaFerrari road car, by contrast, develops around 300kg of downforce at the same speed. So you could say the RS.01 has a reasonable amount of grip at high speed. Or could also state that it sticks to the road like chewing gum does to your hair.

We were lucky enough to drive the RS.01 at the Jerez circuit in Spain, where Michael Schumacher and Jaques Villeneuve had their altercation in 1997, and we came away more than a little bit gobsmacked by the car; not just by what it could do, but also the way it in which it did what it did.

The RS.01 has been designed for both the professional and amateur racer alike, its current role being to provide Pro-Am support races for the Renault World Series single-seater championship, a feeder formula into F1. But Renaultsport’s eventual aim is to race the RS.01 in GT3 championships globally as well, so it is intentionally both easy to drive but also crazed enough to keep the professionals fully engaged. 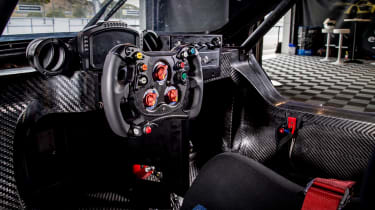 You expect a car that weighs not a lot more than a tonne and which has 550bhp allied to fairly short gearing to be very rapid in a straight line, and the RS.01 most certainly is that. There’s a very slight hint of lag at medium revs but, essentially, you put your foot down and it goes hard, very hard indeed. That’s until the Christmas tree lights appear on the top of the steering wheel to indicate that a higher gear is needed, and soon. And then, bang, you’re into the next gear and it happens all over again.

What you might not expect from a car such as this is for the steering to be so incredibly light (thanks to its variable power assistance) or for the gear change to be so very easy to operate, or for the brakes to be so immensely powerful.

Correction, you always expect the brakes to be powerful when there are four huge carbon composite rotors at each corner, but never this powerful or this easy to use. It’s thanks to the fact that they are equipped with a quite brilliant five stage anti-lock system. 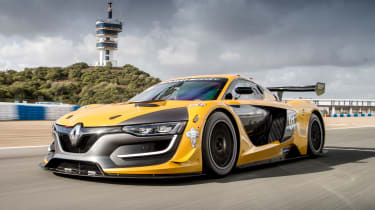 As fast as it feels in a straight line, and however well it stops or changes gear, it’s the grip the RS.01 generates through the high speed corners at Jerez that first frays and then just shreds the outer edges of one’s imagination. It takes a fair bit of getting used to, mainly because the harder you push it, the faster it goes, and the more grip the RS.01 then generates. But once your confidence in it begins to build, the more glued the RS.01 becomes. Renaultsport claims it actually has more grip in high speed corners than the single-seater cars from the World Series, and on this evidence we don’t doubt them for a moment.

Quite what the RS.01 would do to a field of GT3 racing cars in its current state is hard to imagine, although there are ways and means to make it slower in order that it doesn’t just blitz the opposition from the word go, otherwise it won't be invited to compete in GT3 championships in the first place.

But in the meantime, be in no doubt; the magicians at Renaultsport have done it again. In fact they’ve surpassed themselves this time, and then some.