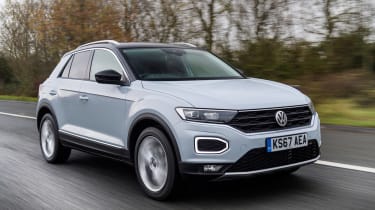 The fact that the Volkswagen T-Roc is so desirable despite arriving late to the crossover party – not to mention turning up with some surprisingly cheap feeling interior plastics – speaks volumes of how good it is. The bold styling and crisp handling impress, and opting for this entry-level 1.0-litre engine won’t leave you feeling at all short-changed.

You’d better get used to the shape of the new Volkswagen T-Roc, because if its maker’s prediction turns out to be correct it’s going to be vying with the Golf, Polo and Tiguan as one of the biggest-selling VWs in the UK.

That’s no surprise when you consider it drops into the same hugely popular class of crossovers as the likes of the Nissan Qashqai and SEAT Ateca, marrying the tough styling of an SUV with the lower running costs of a family hatchback.

It is built in VW’s AutoEuropa factory in Portugal where it will take over capacity from the recently discontinued Scirocco. Like that car, the T-Roc is one of the braver designs in the VW stable, with a wide grille, sharp bodywork creases and bulging wheel arches really helping it to stand out. 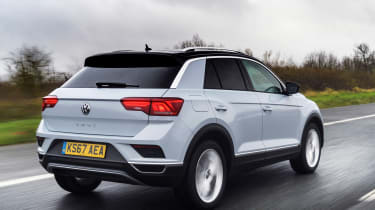 There is also much more of an emphasis on personalisation than with other VWs, with a contrasting roof, coloured dashboard inserts and even colour-coded alloy wheels all part of a new Design trim level that makes its debut on the T-Roc.

However, it’s the SE that is expected to make up the bulk of orders, and most of those will be fitted with the entry-level 1.0-litre three-cylinder turbo petrol unit. In the T-Roc it returns 55.4mpg according to VW’s official test results, and produces 113bhp and 200NM of torque, the latter from 2,000 to 3,500rpm.

The fun doesn’t stop there either, but continues to ramp up as the little engine thrums its way enthusiastically north of 6,000rpm. The 0-62mph dash takes 10.1 seconds and while that might not sound impressive, the T-Roc always feels a bit faster than its figures suggest – helped by a slick six-speed manual gearbox. 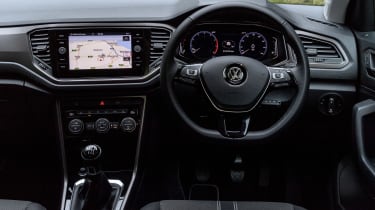 It’s not only the engine that’ll put a smile on your face, because this is one of the best handling crossovers you can buy. Even in basic front-wheel drive form, the T-Roc turns in crisply, corners with lots of grip and barely any body roll; changing direction with a flick of the driver’s wrists.

This doesn’t come at the cost of an overly firm ride either, or at least not if you stick with the SE’s 17-inch wheels. In fact, our only real criticism of the way the car drives is the amount of wind noise on the motorway, but even that’s only evident because everything else is so quiet.

Less easy to forgive, is VW’s use of cheap-feeling interior plastics compared with a Golf. What you expect to be softly padded surfaces (such as the top of the door panels) are now hard and scratchy. The cabin design itself is also rather plain without the Design model’s coloured inserts, but you can’t fault the ergonomics. 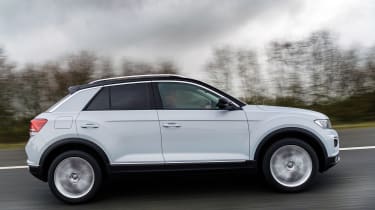 In terms of practicality, the T-Roc is not as roomy as the similarly priced Ateca, but can still carry four tall adults with ease. The middle rear seat is pretty narrow, however, so if you regularly need to carry five people then you may need to look elsewhere.

Another tip is to stick with the space-saver spare wheel over its full size equivalent, because otherwise you lose out on the use of the dual-height boot floor. Given that in its lowest setting this increases luggage capacity by 79 litres (to give a total of 445 litres) it makes a big difference to how much luggage the car can carry.