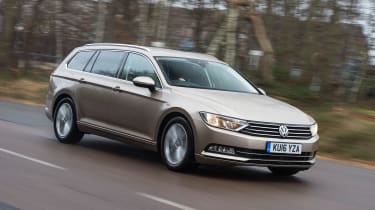 The eighth-generation Passat Estate has attempted to bridge the gap between the family car class and premium models. It's based on an enlarged version of the VW Group’s versatile MQB platform, and it has more space than ever.

Lighter than the model it replaces, the Passat Estate also has improved fuel economy and CO2 emissions. However, the reality is that it sits in the middle ground in the executive estate market.

On the one hand it goes up against traditional competition such as the Ford Mondeo Estate and Mazda 6 Tourer, while on the other, Volkswagen has made the Passat posher than ever before so it can do battle with premium cars like the BMW 3 Series Touring, Mercedes C-Class Estate, Audi A4 Avant and Volvo V60.

At the very top of the tree is the Passat GTE plug-in hybrid, with prices sat around the £40,000 mark. That gets you a 1.4 TSI petrol engine linked to an electric motor and battery pack. The plug-in hybrid delivers 215bhp and manages 0-62mph in 7.6 seconds. Volkswagen claims official economy of 201.8mpg, which you could achieve if you plug it in every time it's parked.

There are a number of other engines to choose from. The cheapest is a 148bhp 1.5-litre TSI petrol version, while further up the range there is a 2.0 TDI with 148bhp or 187bhp.