The BMW M5 has, through deed and reputation, earned a rather large following. The new version of BMW’s performance saloon aims to continue the success of its ancestors and is set to arrive in 2018.

The new M5 was revealed at the 2017 Frankfurt Motor Show well before deliveries are expected to begin. It is derived from the G30-generation 5 Series executive saloon and for the first time uses BMW’s xDrive four-wheel drive system. The engine is a revised version of the twin-turbo V8 that was found in the previous M5, known as the F10, but the transmission is a new eight-speed semi-automatic system.

While a similar 4.4-litre bi-turbo V8 could be found in the old M5, it was not packing 592bhp. Such a power figure means that the new M5 has more power even than the E60 M5 which famously used a V10 engine.

The turbochargers themselves have been revised, and also work together with a revised set of exhaust manifolds engineered to allow more expelled gases back into the engine. The lubrication and cooling systems have been replaced, with a new race specification oil pump added to helping ensure the mighty V8 keeps on ticking over. 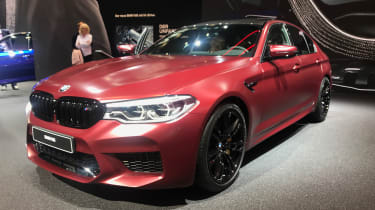 The power figure of 592bhp represents a 40bhp hike over the old car, and 750Nm of torque means a jump of 70Nm over the old torque figure. All 750Nm is available from just 1,800rpm, enabling sharp acceleration and everyday usability. The extra power and torque should also make for the most earth shaking showdown between the Mercedes-AMG E 63 and BMW M5 ever.

All that power is controlled by an eight-speed automatic gearbox that comes with manual paddles for sequential shifts, while the car's settings are programmable via BMW’s Drivelogic system. Drivelogic Mode 1 sets the gearbox to deliver comfortable and efficient shifts when taking it easy, while Mode 2 is intended for faster shifts and more enthusiastic driving. Mode 3 is for track driving, and delivers short but severe shifts.

The other big addition to the M5 is a four-wheel-drive system that has been developed specifically for it. Known as M xDrive (MX-5?), the system is biased towards the rear axle to keep the M5's rear-wheel drive handling intact, and it only sends power to the front wheels when the rears begin to struggle. BMW claims that in most circumstances, this 4WD system will see the M5 behave like a rear-wheel-drive car.

Selectable driving modes will allow the driver to choose the level of electronic intervention present, though. For example, in M Dynamic mode, there’s a greater threshold for slippage before power is sent to the front axle, while a pure rear-wheel-drive mode is also available.

Yet more electronic assistance is offered via the customisable variable damper control and M Servotronic steering. Both of these boast three selectable modes; Comfort, Sport and Sport Plus. 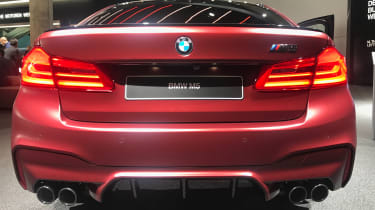 Aluminium body panels and a carbon fibre-reinforced plastic roof have been added to shave around 40kg off the M5's kerb weight when compared to the outgoing car. And the cabin gets an M-inspired update with sports seats, special trim and M-branded digital dials. The M-Sport steering wheel also boasts two red buttons that are used to alter the car’s assorted settings.

Under the aggressive bodywork, the M5 gets stiffer anti-roll bars, while cross-body rigidity is improved thanks to the addition of an additional strut and aluminium cross brace over the rear axle.

Braking is handled by vented discs with six-piston calipers and special M compound brake pads, while heavy duty carbon-ceramic brakes are available on the options list.

The new BMW M5 will cost £89,640 when it hits UK showrooms next February, although there will be plenty of options available to bump that price up further.

What do you think of the new BMW M5? Would you choose it over the Mercedes-AMG E 63 S? Let us know below…