How to refit injector seals

Td5 running problems are often due to poor injector sealing in the cylinder head. Alistair Cusick explains the cure. 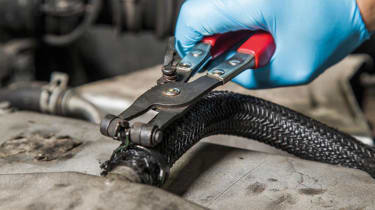 The Td5 engine first appeared in Defender and Discovery II models in January 1999. Originating from a plan to have four, five and six cylinder diesel engines, the five-pot version was the only one that was to see the light of day. To the concern of Land Rover fans, it relied on complex electronic management software, and a drive-by-wire throttle. For many, it marked a shift from the mechanically simple, and easy to fix vehicles that went before, but new engines were needed to meet increasingly stringent emissions regulations.

Crucial to the Td5 are the injectors, known as Electronic Unit Injectors (EUI). They not only inject the fuel into the cylinder, but they also receive the fuel from the 4 bar supply and pressurise it to over 1000 bar needed for injection purposes. They were a common fitment to larger commercial vehicles, but were specially adapted for the Td5 - indeed, the Defender and Discovery  were the first passenger vehicles to use the technology. Compared to a Common Rail system, which needs very high pressure to be maintained in a relatively large length of the fuel injection system, EUI injection only uses high pressure at the very point of injection, thereby avoiding many of the issues associated with more conventional systems used elsewhere.

One notorious problem that does occur on the Td5 system is failure of the seals on the EUI injectors. There are two: one rubber O ring that seals the injector to the cylinder head, and a lower copper washer which seals the injector tip to the head. If either fail, then expect the vehicle to show signs of poor starting or poor running, or a noisy fuel pump working much harder to expel any air in the system. In extreme cases of failure, it’s possible for fuel to leak down past the injector, into the engine oil. Sniffing the dipstick in this case usually reveals the tell-tale diesel smell, combined with a raised oil level on the dipstick. 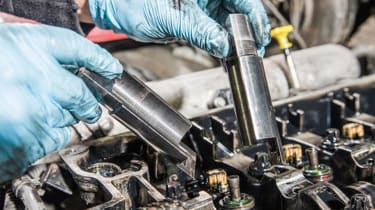 If you suspect a failed seal, then it’s best practice to change them on all five injectors. The 158,000 miles 2002 Td5 Defender shown here was gradually becoming harder to start of a morning, so the immediate diagnosis was likely failure of one or more injector seals. Diesel wizard Ian Baughan of IRB Developments has done many injector seal changes, and he guides us through how to do the task in a couple of hours. Whilst there is an official tool to remove the injector, it is possible to make one.

Obviously, if you decide to make your own, you will need to take extra care not to damage the head as you lever out the injector. If you are careful, and don’t have badly carbonised injector tips, you should be fine. Of course, if you do have severe carbon build up, then you’ll likely disturb lumps of it into the cylinder, meaning head removal is then needed to ensure no damage is done when you start the engine again. Throughout this job, cleanliness is essential top avoid any dirt getting into the fuel system. If you have noticed an increase in the sump oil level on the dipstick caused by fuel leaking down past the injector seals, then an engine oil and filter change is needed too.

• Wear eye protection when disconnecting fuel components until it is confirmed that all residual pressure has been lost from the system.• Wear gloves or barrier cream to avoid suffering any adverse effects of oil on the skin.