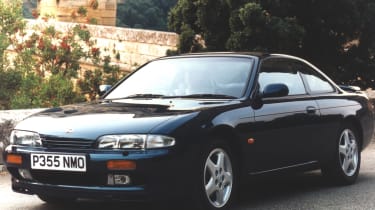 Turbocharged, rear-wheel drive and quite regularly found going sideways, few casual onlookers would think that the car they were looking at was named after their Gran. Thankfully the fifth-generation Nissan Silvia was sold as the 200SX in the UK, but whatever its name this conservatively styled coupe had some proper sporting credentials.

Capable of a seven-second 0-60 time, allied with a perfectly-balanced chassis, the 200SX was a strong competitor to the dominant German offerings. 20 years on and the 200SX is still a great little sports coupe. Robust and easy to modify they can be turned into serious track machines, something the drifting community has taken advantage of for some time.

Left standard, the 200SX is an eminently usable modern classic – but finding one will prove to be somewhat challenging. Whatever your intentions, take a read through our guide to see what they are like to own second hand.

The 200SX was introduced in the UK in 1995, equipped with the SR20DET 2.0L turbocharged motor pushing out an unstressed 197bhp in standard form. Offered solely in coupe body style, power was sent to the rear through either a four-speed auto or five-speed manual gearbox. The styling was somewhat unadventurous, but it has aged well over the years and few would guess that it was an early ‘90s design.

As the 200SX was already two years old by the time it arrived in the UK, the mid-life facelift arrived in 1996. A more aggressive front end with new headlight clusters was introduced and minor mechanical improvements, such as a move to ball bearing turbochargers, were carried out.

Standard specification was decent for the time and all cars got a four-speaker sound system, central locking and a driver’s side airbag. Touring specification models received additional kit such as 10 CD changer, leather and bodykit on facelifted models.

Unmodified cars can be quite hard to come by, so unless you are dead set on a standard one a mildly modified 200SX will be far easier to source. There are also a few JDM imports around but make sure there is a service history to go along with it. There are a lot of 300bhp+ cars out there and while the drivetrain is strong, these tend to be significantly more expensive to maintain as components will have taken a lot of abuse over the years.

If you do find an example that is free from modifications, with low miles and no rust, the chances are that it will be an automatic. Manual UK-market cars in this condition are exceptionally rare.

• General: there is a thriving 200SX community globally and parts and performance accessories are generally easy to source.

• Powertrain: known for their strong performance and easy modability, many cars have been driven hard so do a thorough check of the driveline components to ensure everything is in good condition. It is relatively easy to liberate 30-40bhp from a standard engine and many will have been remapped to take advantage of this.

• Modifications: upgraded intercoolers, turbos, clutches, brakes and exhaust systems are commonplace on the 200SX, standard ones are hard to come by and as long as the modifications have been professionally carried out they should not give trouble.

• Engines: though generally strong, the engines can exhibit accelerated camshaft wear especially if regular oil changes have been skipped.

• Gearbox: clutches and gearboxes tend to cope well with extra power but crunching when engaging gear could mean worn synchros.

• Turbochargers: some of these cars are now 20 years old and the turbochargers may be getting on a bit. Blown gaskets are common and if there is excessive blue smoke and oil leaking from the turbo manifold this may mean that the turbocharger unit itself has blown. Blown turbo gaskets can also make the car sound very noisy at idle.

• Manifold: exhaust manifolds are a weak point and can develop leaks, most would have been changed by now and non-standard systems are quite common. Be sure that the car is fitted with catalytic converter, as it’s common to remove it. While this might be beneficial to performance and the life of your turbocharger, passing an MoT might be a little tricky.

• Specialist: if you are looking at acquiring a heavily modified 200SX it is worth taking it to a specialist for a thorough once over as the huge variety of aftermarket parts can make assessing your purchase a daunting task.

• Accident damage: due to the nature of the car, accident damage is a real possibility. A basic HPI check will reveal if the car has been written off at any point, but that doesn’t rule out any damage that wasn’t declared. Giving the car a thorough visual inspection is vital to ensure all of the panels line up, although having a specialist check the underside for signs of previous accident damage could be worthwhile.

• Corrosion: as well as accident damage, a thorough search for corrosion is vital. Obvious checks include the front and rear wheelarches, as well as inside the wheel wells/suspension struts for signs of rust. Sills should be prodded, while getting the car up on a ramp to check the floorpan is worth the effort. Expect some minor corrosion – even on good cars – but repairs to anything more serious should be factored into your purchase price.

1996: 200SX gets facelifted, referred to as S14A/Kouki model. Changes include a more aggressive frontal treatment and detail mechanical updates

The used 200SX market can be divided into standard (very rare), modified and totally transformed categories. Standard models tend to mostly be automatics and hover around the £4500 mark, although as we said earlier mint cars (especially manuals) could potentially command upwards of £10,000.

The modified cars generally have mild to wild engine and suspension changes, most owners are knowledgeable, and as long as the work has been done professionally a modded 200SX can be a low price performance machine. Prices range from £2000 for a high miler in rough condition, to £8000 for the later facelifted cars.

Then there are the fully built up drift machines which are slightly beyond the scope of our guide, prices vary greatly depending on the components installed and it is worth getting a knowledgeable specialist to assess your potential purchase.

Whether, standard or modified, the S14 Nissan 200SX can be a great daily driver or weekend toy. Easy to maintain and modify they are the modern classic for the driving enthusiast on a budget.