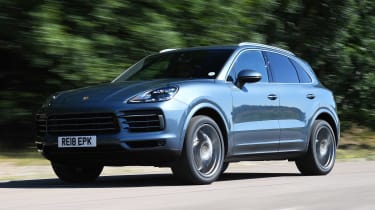 We’ll get to the crazy acceleration numbers for Turbo models further down this review, but first there’s a new chassis control system called 4D that monitors an array of sensors, feeding back to an active air suspension system to provide optimum responses over a wide range of terrains and on the road. Improving off-road performance was one of the key objectives for the platform, and with different settings for gravel, mud, sand and rock the Cayenne offers a similar degree of ability to its Bentley Bentayga sister model.

There are four drive modes for when you’re on the tarmac (let’s face it, where the car will spend most of its time), and especially with options ticked for rear-wheel steering and active anti-roll bars, on the road is where Cayenne really shines. Even without these expensive add-ons the Porsche sets a new benchmark in ride and handling for the class.

Body roll is all but eliminated in corners, the steering offers the responsiveness, accuracy and weight of a serious sporting saloon, and the brakes offer plenty of well-modulated stopping power. Ease off on the performance though, and the Cayenne’s clever suspension softens up too, bringing a real improvement to ride quality and refinement for passengers whether on motorway or A-road cruises, or around town. 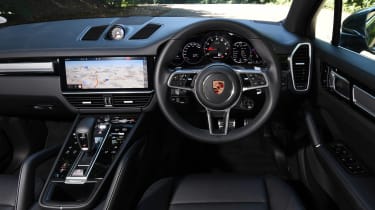 The Cayenne Turbo S offers performance that’s even more impressive than the last. Its engine is a twin-turbo V8 that delivers 542bhp and 770Nm of torque, a small but significant advance over the previous Turbo model’s 4.8-litre V8. Specify the optional Sport Chrono package with launch control, and the latest Cayenne Turbo has the potential to catapult you to 62mph from standstill in 3.9 seconds thanks in no small part to the amazing traction of the active 4x4 powertrain. Top speed is 177mph, which is thoroughly impressive, too.

The Turbo S E-Hybrid is even quicker to 62mph, taking just 3.8 seconds. The hybrid system is made up of the Turbo’s normal 542bhp V8 and an additional 134bhp electric motor, which also helps increase the top speed to 183mph.

Set against its high-performance stablemates, the standard Cayenne’s 335bhp 3.0 turbocharged V6 engine looks weedy, until you remember Sport Chrono equipped versions will crack the 0-62mph sprint in 5.9 seconds and top 152mph. The 434bhp Cayenne S knocks a second off the 0-62mph time and touches 164mph.

Opt for the Cayenne E-Hybrid and you'll get a turbocharged 3.0-litre V6 petrol engine, together with an electric motor and battery combo. Total power is 456bhp, and the E-Hybrid offers an electric-only range of around 19-22 miles. While CO2 emissions are low and official economy stats are impressive for the E-Hybrid, this doesn't come at the cost of performance: 0-62mph takes just 5.0 seconds, top speed is 157mph and you can travel at up to 83mph in battery-only mode.

Porsche's engineers have even managed to mask the E-Hybrid's extra 300kg mass well. It's a fast, frugal and convincing package, and one that means few are likely to decry the current absence of a diesel Cayenne.