A full buyer's guide for the Vauxhall Cresta (1954-1972) including specs, common problems and model history... 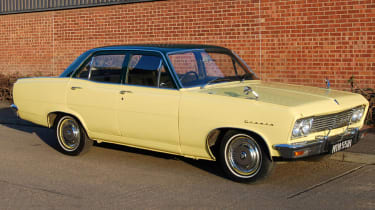 Introduced as a more luxurious version of the Vauxhall Velox, the Cresta offered the discerning 1950s UK motorist the option of travelling in style approaching Jaguar levels, without the price tag. Over the years, each successive generation of Cresta offered more space, pace and upmarket trim options, culminating in the Viscount which could hold its head high against some far more expensive competitors.

While the early cars with their American-inspired styling were the most popular, the entire Cresta range offered a lot for the money.

Which Vauxhall Cresta to buy?

There were three distinct versions of the Cresta over the years; each was successively larger and more luxurious than the next, although in classic car circles it is the earlier E and especially the second generation PA models that receive the most attention.

Introduced in 1954, the Cresta E was a big step up from the Velox. Interior appointments and exterior styling were far more upmarket, the only carry over being the 2.2-litre straight-six engine and three-speed manual transmission. A number of detail changes were carried out each year culminating in the totally redesigned Cresta PA which arrived in 1957.

These models attempted to capture a slice of Americana, utilising lots of chrome, whitewall tyres and fins, although in a suitably restrained British fashion. The wrap-around windscreens were seriously cool, and while bench seating was still standard, individual front seats were available from 1961 – along with a new 95bhp 2.7-litre straight-6.

The PA was available in four-door saloon, as well as five-door estate body style for the first time. The PA models remain the most sought after and many have been modified over the years making original specification cars very rare.

For 1962, the Vauxhall Cresta PB lost its American styling cues and a larger, roomier but less stylish body shell was introduced. More interesting were the standard-fit front disc brakes and – from 1963 onwards – an optional 115bhp 3.3-litre power unit.

Transmission options now included an optional four-speed floor-mounted manual and either a two or three-speed automatic. Power steering became an option in the last year. The final iteration of the Cresta introduced in 1965 was the PC. Carrying on the tradition of ever larger body shells, this generation introduced the ultra-luxurious ‘Viscount’ specification.

The Viscount arrived in 1965 and had a standard specification list which included power steering, seat belts, electric windows and a heated rear windscreen. Engine and transmission options remained unchanged until 1971, when a floor-mounted four-speed manual or three-speed automatic in conjunction with bucket seats became standardised.

The major differences between Cresta models occurred between the PA and PB models, despite the similarities in running gear the styling and interior appointments were what really set the cars apart from each other. Picking the right one is really down to personal taste, as well as what’s available at the time.

• Corrosion: rust is a common problem, and if a body shell is too far gone it’s best to walk away. Replacement panels can be hard to source, and the cost of getting a car right again can be prohibitive. Check behind the headlamps, door skins, door sills and especially around the steering box for any signs of corrosion.

• Powerplant: engines are tough and with regular care tend to last over 100,000miles between rebuilds. Most have had upgraded hardened valves and springs to cope with unleaded fuel, and as long as the oil is changed every 3000 miles, the only recurring issue a the tendency to leak a bit of oil.

• Brakes: cars equipped with drum brakes tend to take their time coming to a stop, while cars with front discs are far more confidence inspiring. A disc conversion is a desirable mod.

• Starter motor: starter motor solenoids can stick, but reconditioning them is not overly expensive.

• Bushes and dampers: suspension components are still available, and fresh bushes and dampers can make a massive difference in the way the car rides and handles. Handbrake shoes can bind after long periods spent stationary.

• Electronics: electrical systems are basic and most issues can be traced to damaged wiring or broken switches. Interior trim can be difficult to source, so a car with all its trim intact is ideal.

Values tend to fluctuate based on condition rather than specification. Whether you opt for the earlier more stylish cars, or one of the later straight-laced variants, a well maintained Cresta can make for an enjoyable classic car experience.