The Volkswagen Polo is getting old, but the DSG box is still a great choice 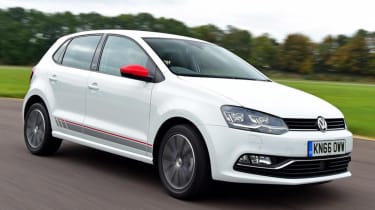 There's a new Volkswagen Polo just around the corner, so now's the time to bag a bargain on the outgoing model. It uses the same VW Group seven-speed DSG gearbox as the Skoda Fabia, and it's offered with the same 1.0 TSI 110PS three-cylinder petrol, although you can also get it with a 1.2 TSI 90PS four-cylinder petrol, if you don't like the idea of a triple. There's no diesel auto available, while the three-door version will be axed when the next Polo arrives.

If you're after something a bit sportier, the Polo BlueGT features VW's 1.4 TSI 150PS four-cylinder with active cylinder technology that shuts cylinders down when running on light throttle loads. This is also offered with the seven-speed DSG, but in the BlueGT, there's no economy sacrifice, as both it and the manual have claimed economy of 58.9mpg.

At the top of the range, the VW Polo GTI is also offered with the DSG twin-clutch seven-speed auto. This hot hatch isn't as much fun as a Fiesta ST or MINI Cooper, but opting for the DSG box does match the GTI's character as a grown-up performance car. And if you want to take manual control, it comes with steering wheel paddles to let you choose gears. 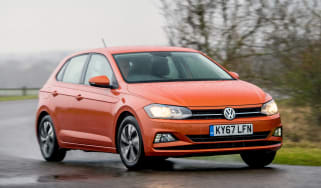