Volvo says there are ‘Scandinavian influences’ everywhere in the new Volvo XC90. Take the T-shaped ‘Thor’s Hammer’ daytime running lights, for example – the narrow light bars give the XC90 an aggressive glare, helped by its deep front bumper and bluff radiator grille.

Despite the square-set front end, the rounded wheelarches and raked windscreen pillars provide a sleek and aerodynamic look, but the 19-inch alloy wheels and silver roof rails on Momentum models mean the XC90 still has more than a hint of the rugged SUV about it.

At the rear, the XC90 is less striking, but the brand’s designers have still used the light clusters to good effect. The tail-lamps run from the top of the boot right down to the bumper and, with Volvo’s traditional shoulder kink halfway down, the XC90 is instantly recognisable in the dark. There’s also a small boot lip spoiler and a few creases in the tailgate. Combine that with the car’s dual exhausts, and it makes for a minimalist and crisp rear end.

That theme is repeated inside, with expensive-feeling brushed metal inserts, lots of leather and an attractive layout. Compared to the last XC90, Volvo has decluttered the dashboard and removed most of the buttons. Instead, the entertainment and climate systems are controlled by a central touchscreen, flanked by two main air vents and attractive chrome detailing. Along with the Range Rover-like digital dials, this central unit – known as the Sensus interface – is the highlight of the cabin. 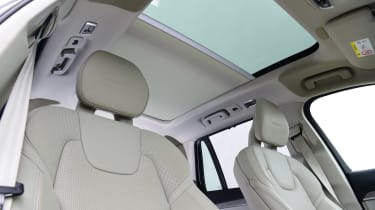 Spending almost £5,000 on the Inscription spec upgrade will add Nappa leather upholstery, 20-inch alloy wheels and a host of styling and cosmetic tweaks, such as a matt silver front grille, luxury floor mats and enhanced interior illumination. Opting instead for the R-Design upgrade costs a few hundred pounds less, and brings ‘sports’ seats in leather and nubuck, gear shift paddles located behind the steering wheel and gloss black exterior trim.

Those who spec the Pro equipment upgrade to either the R-Design or Inscription versions, will receive the benefit of Apple CarPlay and Android Auto connectivity as standard, while it's an £850 option for all other models as part of the Harman Kardon Tech pack. The Intellisafe Surround system is available for an extra £500 and includes various driver safety modes.

All XC90s get a nine-inch tablet with sat-nav that offers traffic info, while the system also gives you access to a range of apps. You can book services remotely, while Volvo’s On Call app system lets you send destinations from your phone to the car, as well as unlock the doors remotely.

Everything from the climate control to the entertainment and sat-nav is controlled through the touchscreen, which means the cabin has a decluttered look, but the screen isn’t as responsive or as easy to use as Audi’s MMI rotary controller. As with the Land Rover Discovery, some screen presses can take a little while to register, too.

While it looks great and contributes to the XC90’s modern feel, the reality is the Volvo’s infotainment system isn’t as polished as either of its rivals. Nor does it offer as much functionality – although the digital display in front of the driver showing sat-nav directions is a nice touch and is fitted as standard here.

There’s an ‘industry-leading’ voice control system said to recognise 300 ‘plain English’ phrases, or you can navigate through all the Sensus touchscreen functions using buttons on the steering wheel. The whole set-up feels intuitive and user-friendly – following a brief but necessary period of acclimatisation.

The optional 1,400W, 18-speaker Bowers & Wilkins audio system produces a superbly detailed sound and plenty of power – and because the Volvo XC90’s interior refinement is so good, you can really appreciate the installation’s qualities.