Mild-hybrid diesel tech offers good economy, but the XC90 T8 plug-in hybrid is the most efficient model in the range

The XC90’s most popular engine has been the D5, so the B5 should continue that trend. Volvo quotes WLTP-tested fuel economy of up to 41.5mpg for the B5. This is poorer than the 49.6mpg quoted for the D5, but is a reflection on the tougher test conditions now faced, and means you're more likely to achieve this figure in everyday driving.

Elsewhere, the B5 petrol has quoted WLTP figures of up to 32.4mpg, while the B6 manages up to 30.7mpg, so we'd only really recommend those engines if you have deep pockets.

The XC90 T8 Twin Engine will be a favourite among company car users – its plug-in hybrid tech officially registering up to 100.9mpg in WLTP testing. This will be an optimistic estimate in real world driving, but the resulting 76g/km of CO2 will be more useful. That’s assuming you can stretch to the near £68,000 starting price. You’ll need to be a committed eco-warrior - or do lots of miles – to justify the investment.

To maximise the T8's potential, you really need to plug it into a charging point at every opportunity. Volvo does offer a number of charging options, whether they’re at home or at work, and has teamed up with charging specialist Pod Point to provide high-voltage charging installations. This system can replenish the battery from flat in a lot less time than it takes via a standard 240V plug socket. 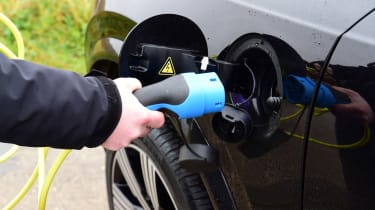 In reality, the plug-in hybrid will get nowhere near its claimed mpg in anything like ‘normal’ usage – but that’s a common complaint for all plug-in hybrid vehicles. However, Volvo claims the XC90 T8 will travel up to 30 miles on electric drive alone.

A wide range of passive and active safety and security technologies has helped to ensure that insurance costs are competitive for the new Volvo XC90.

Our favourite B5 Momentum model is rated at group 41 – which is comparable with the Audi Q7 3.0 TDI quattro S line, although the Land Rover Discovery starts from Group 33.

The more powerful B6 model will cost you more to cover as it’s been rated at group 42, while the T8 Twin Engine hybrid versions have slightly higher insurance ratings than the conventional models.

The old XC90 proved to be quite stubborn in holding on to its value, so we’d expect this new model to be no different. The diesel XC90 has a depreciation rate in the region of 48-51%, while the T8 Twin Engine is in the 52-55% range. As you would expect, the thirsty T5 and T6 petrols have the poorest figures with around 45-50% range.