In this case, we’re talking about the star car from the original Mad Max, not Fury Road. 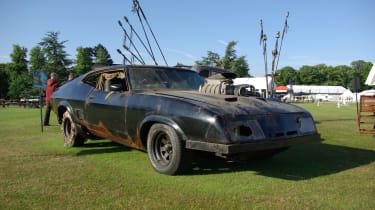 In this case, we’re talking about the star car from the original Mad Max, not Fury Road. Known as the ‘Pursuit Special’ or ‘V8 Interceptor’ in the movie, the Falcon XB was almost unrecognisable due to the extent of the modifications.

Along with an enormous supercharger sticking out of the bonnet, the Falcon was finished in all black, with chunky tyres, covered lights and huge pipe organ exhausts protruding from the sides. The car makes a return in Mad Max 2: The Road Warrior, but it looks way past its prime. It was modified further to cope with driving in such a harsh landscape and was even booby trapped in case anyone tried to pinch it. It also appeared briefly in the latest Mad Max movie Fury Road, before being crushed by two trucks.

The Ford Falcon is a stalwart car of the brand’s Australian range, with the name being linked to anything from a two-door sports car to a family-friendly estate. The Falcon today is similar to the Ford Mondeo in Europe, but the Austrailan counterpart has much larger engines in its range. The Falcon ‘XB’ series was built between 1973 and 1976 and, again, encompassed saloons, station wagons, ‘utes’ and of course the two-door hardtop that featured in Mad Max. Its closest rival would have been the similarly V8-powered Holden Monaro, a car that eventually made it to the UK in 2005 badged as a Vauxhall.