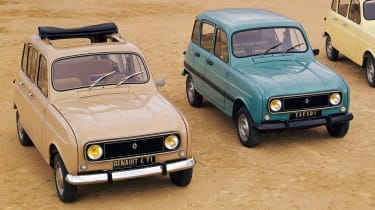 Introduced as a replacement for the hugely successful 4CV, the Renault 4 was a bold contender in the booming small car segment of the early 1960s – taking on, and in many respects beating the Citroen 2CV at its own game.

Dubbed the ‘blue jeans’ car by Renault President Pierre Dreyfuss, the R4 was designed to appeal to a diverse audience. Initially marketed as an estate car, the 4 has become widely recognised as the world’s first hatchback. Another first for Renault was the front-wheel drive layout which, combined with the dash-mounted gearshift, offered much improved interior space.

After a production run of over 8 million units spanning over four decades the humble Renault 4 has developed a global following that continues to this day. Built in over a dozen countries and sold the world over it is a true French automotive icon. Read on to see what it is like to own one today.

Which Renault 4 to buy?

With many detail changes over the 31 years of production many detail changes were introduced over the years. Engine sizes ranged from 600cc in the first cars to 1.1l in the final GTL models. Power outputs were low but with not much more than 600kg to push along, any engine option is nippy enough to keep up with city traffic.

Special editions were common, especially in the latter years of production, however the majority of changes were generally limited to some unique trim and equipment. There were a few worthwhile updates over the years, such as the introduction of a four-speed transmission and 12V electrical system in 1967 and the addition of seatbelts in 1970.

Model wise, there was also a Sinpar four-wheel drive model, produced from 1963 right up until 1992, as well as the uniquely styled Parisienne between 1963 and 1968. The Rodeo 4 was similar in concept to the Citroen Mehari, and was intended for recreational use – lacking side windows and doors.

The Plein Air was similar concept but retained the standard body panels. There was even a very popular van derivative with a large rear loading area and the same running gear as the rest of the range. The Savane and Clan derivatives arrived in 1986 to bolster sales and were the last evolution of the Renault 4 platform.

Other than the fact that this was Renault’s first foray into the front-wheel drive segment, the clever torsion bar independently sprung suspension allowed for good ground clearance and gave a smooth ride over rough terrain.

When picking a car bear in mind that the earlier three-speed 6v versions are less useable every day than the later cars, and a sound chassis is more important than mileage or mechanical condition. Quite a few have been tuned or modified with more powerful engines, which is no bad thing...

• Parts supply: mechanically the Renault 4 is robust and relatively easy to maintain; such is its popularity that there are still specialists out there (especially in France and Germany) who still stock parts and difficult to find items.

• Early cars: as a general rule the earliest cars built up to 1967 are the hardest to find parts for while the later TL (1968-on) and GTL (1982-on) models are more comprehensively catered for.

• Powerplant: engines, especially the 1.1-litre units as fitted to the GTL are strong; lack of regular servicing can be identified by sludge build up around the valve gear.

• Trim: vinyl seats on early cars last longer than the cloth covering on the later models, what little interior trim there is can generally be sourced from specialists, especially for post-1968 models.

• Bodywork: the bodywork on all but the most cared for examples will have suffered from some rust by now, although life in a drier climate will help. The arches, foot wells and wings are all likely to rust over time but the section where the rear suspension bolts to the body is a particularly troublesome area and is a big job to rectify. Thankfully once again there are specialists who stock body panels and chassis components if the rot is too far gone. Prices can be steep though.

1962: Renault 4 Super introduced with same 747cc engine but power up to 32bhp. Base spec Renault R3 discontinued due to poor sales.

1968: Plein Air model introduced, designed for recreational use it had no doors or side windows. Last year of production for Parisienne models

Decent, serviceable Renault 4s start at around the £2500 mark. Pay much less and you may be buying someone else’s problem, or at least something very scruffy. At the other end of the scale, excellent condition cars with traceable history can be found for up to £10,000.

Specification levels and model year are less important than structural integrity, however the later TL and GTL models tend to be more sought after. Fully restored cars and original time warp models can command far higher prices but make sure you get a specialist to look over your purchase to confirm its provenance.