The Octavia is based on a Golf platform, but it's far larger and more versatile than its sibling, especially in Estate guise 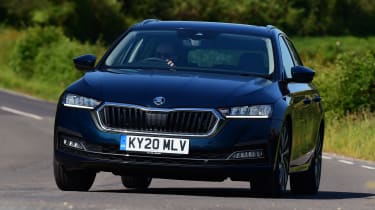 The Skoda Octavia Estate has pushed the boundaries, as it's bigger and better than its predecessor. It was first crowned best estate at the 2013 Auto Express New Car Awards, and again in 2019 following a refresh in 2017, it's a great all-rounder.

The Octavia Estate has always been one of the most spacious cars in its class, and now Skoda claims the new model boasts a 640-litre boot rising to 1,700 litres with the rear bench folded.

The new estate looks far more sophisticated and is able to hold its head high among its premium rivals. The interior is also impressive, with some materials which could easily belong to an Audi.

It's economical, too, with a range of efficient petrol and diesel engines, while plug-in hybrid tech will also be available.

It doesn't lack for equipment either, with Bluetooth, DAB radio and engine stop/start coming as standard, as well as a double-sided boot floor, a rubbish bin and an ice scraper hidden in the fuel filler cap, while the most recent update added a torch in the boot and umbrellas in the doors. All this can be yours for around the same money as a VW Golf hatch, too.