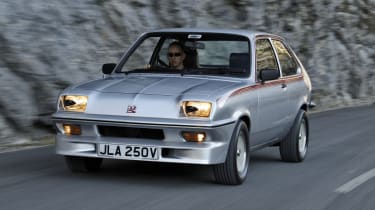 In a bid to increase Vauxhall’s racing pedigree, General Motors decided that the company should get involved with the international rallying scene. If it hadn’t been for this and the assistance of Dealer Team Vauxhall and Blydenstein Racing, the racy little Vauxhall Chevette HS may never have seen the light of day.

Its rallying achievements may not have quite matched the mighty Ford RS2000, but the Group 4 Rally spec HS achieved some notable results, clinching the driver’s championship in ’79 followed up with the manufacturer’s title in ’81. When it came to the road going versions though, things were stacked in the little Vauxhalls favour.

Producing 135bhp from its 2.3-litre motor, not even the RS2000 could match it in a straight line. To make matters worse for Ford fans, an even more potent HSR version was released a few years later. Few of either model survive today and their values are on the rise. Read on to see what to look for when considering one of these iconic little sports cars.

Which Vauxhall Chevette to buy?

The Chevette HS was built in very limited numbers, a minimum of 400 were required for rallying homologation purposes but some suggest that the final amount was perhaps closer to 300. Painted silver with red stripes and sporting a very ‘70s tartan interior trim, all came with a Getrag five-speed gearbox and a sporty body kit.

Power was to the rear wheels and despite the live rear axle, a well set up HS had handling to match the best in its class. Pricing was high, and in a bid to shift more units a handful were painted black, re-trimmed and badged HS-X. The engine was Vauxhall’s own 2.3-litre slant-four, so named because of its 45-degree block.

Fitted with a new 16-valve head and twin carbs, it pushed out 135bhp making it significantly more powerful than most of the competition. Weighing a hair over a ton it could break the 62mph barrier in less than 9 seconds. The changes over the standard Chevette didn’t end there, the HS got upgraded front disc brakes (still drums at the back) as well as a beefed up axle and suspension sourced from the Kadett GT/E.

1980 saw the introduction of the even more limited edition HSR, based on the HS it got further modifications to the rear suspension mountings, rear disc brakes, a twin plate clutch and a more aggressive body kit. Most importantly power was up to 150bhp.

The HSR is even scarcer than the HS with between 30 to 50 produced. Getting the nickname ‘plastic fantastic’ thanks to that body kit, the HSR proved to be a very accomplished racing machine.

In today’s world of turbocharged super hatches the HS/HSR duo are easily outpaced in a straight line, however the experience from behind the wheel is far more engaging and the well-balanced handling allied with just enough power make either car a true performance classic.

• Bodykits: plastic and fibreglass the body kits may be hard wearing, but the rest of the car is made of very rust-prone steel. As these cars are almost 40 years old now, a very thorough inspection should be carried out for signs of rust and botched repairs. Particular problem areas are underneath door panels and wheel arches.

• Fakes: the rarity of both the HS and HSR means that there have been a few standard Chevette models converted to look like them. A thorough history check and knowing what to look for on the car can help you avoid being duped.

• Fibreglass: the HSR came fitted with glassfibre wheel arches, bonnet and rear hatch. Fit and finish should be good although the paint on these surfaces has been known to develop hairline cracks.

• Trim: finding the bespoke panels and interior trim for these cars can be very tricky so factor this into the offering price.

• Powertrain: engines and gearboxes are strong, with the majority of issues arising from abuse and patchy maintenance. Most cars have not accumulated too much mileage so check that regular servicing has been carried out over the years.

1984: Final year of Chevette production, HS and HSR production having ended in 1981

Despite their rarity, just over 100 are registered on UK roads. This means that there are usually a handful of HS and even one or two HSRs on sale at any given time. A few years ago, decent examples could be found for under £10,000, now you would require at least double that for a well-maintained HS.

HSRs are dearer still and If you can find one, a mint example can be as much as £30,000. Tatty cars can still be found at much lower prices but getting them restored, especially if the bodywork and interior need doing may be an expensive and difficult task.

With prices on the rise the Vauxhall Chevette HS is a no-brainer for those looking for a quick, usable classic with handling that promises to brighten up your weekends.