Shock looks of Cortina replacement were softened by early preview 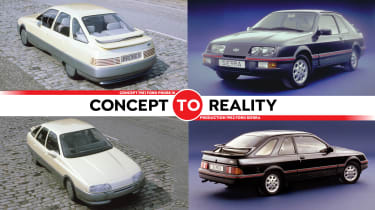 Most concept cars are created for a reason – usually to grab a bit of publicity at a motor show or, in some cases, to preview a production model that’s a further six or 12 months down the line. But in the case of the third vehicle in our series looking at how some of the most famous show cars made it to dealers, we’re highlighting a model whose entire existence was designed to prepare the public for what they were about to be sold. It’s the Ford Probe III.

Look at the Ford Probe III now, and details aside, you probably think it looks relatively normal. But back at the start of the eighties, Ford had a problem. Its design team, led by Uwe Bahnsen and with extensive input from Patrick Le Quément, had come up with a thoroughly radical successor to the much-loved Cortina (above).

Project Toni, or the Sierra, as it would eventually be called, represented a quantum leap in aerodynamics over the sturdy three-box profile of the Cortina, which was a huge seller all across Europe, and particularly in the United Kingdom. Most controversially of all, the new car would also be launched as a hatchback, instead of a saloon.

Ford’s management was committed to the idea of the Sierra – which had a drag coefficient of just 0.34, compared with the blunt Cortina’s 0.45Cd. But at the same time, the firm was concerned that the car’s polarising looks could make it a flop. If buyers were put off by the jelly-mould looks, chief rival General Motors was more than ready to sell them far more conventional-looking Vauxhall Cavaliers and Opel Asconas.

So around 18 months before the Sierra’s scheduled launch, Ford commissioned a concept – a third chapter in the ‘Probe’ series of show cars. These vehicles were, as the name suggests, an exploratory journey into the world of aerodynamic efficiency. The first had been introduced at the Frankfurt show in 1979, as a study into how investment in a more slippery shape could bring the sort of efficiency gains that would cost much more to achieve under the skin.

The little-seen Probe II took the first car’s approach and inched it towards production. That concept had been expected to bring the series to an end. But Ford decided to soften the blow of the Sierra’s arrival by taking its already-approved looks and making them a little bit more radical. 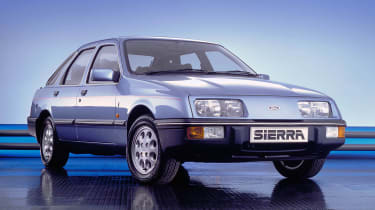 The similarities are obvious. The production car’s roofline is closely mimicked by the concept’s, the headlights and tail-lights are previews of the Sierra’s units, and while the double tail spoilers wouldn’t appear on the entry-level production cars, they did eventually reach showrooms on the performance-oriented XR4i.

The fared-in rear wheels and more slippery side mirrors are perhaps the biggest differences; these helped the show car to achieve a Cd figure of just 0.25 – impressive even today, but remarkable when the Probe III made its public debut at the 1981 Frankfurt Motor Show, a year before the Sierra’s first appearance at Birmingham’s NEC.

Ford’s cautious approach to the Sierra’s introduction didn’t end with this car. A booted version of the Escort, badged Orion, was introduced at least partly because the company wanted to appease conservative buyers. Yet by the middle of the eighties, customers in key markets such as the UK had accepted the Sierra’s looks – and the huge jump paid off in the long run, because the distinctive silhouette proved modern enough to see Ford right through until the arrival of the Mondeo in 1993.

What do you think of the Ford Sierra concept? Let us know in the comments below...