Exterior styling will split opinion. There's decent scope for personalisation, and the infotainment system is pretty easy to use

We're not about to deliver a verdict on how the Kona looks; that's for customers to decide. But there's no doubt that the car's exterior styling is going to split opinion. Hyundai is counting on it, in fact, because there's nothing worse in the image-conscious small SUV market than having a car that fails to provoke a reaction.

The Kona certainly errs towards the 'rugged' end of the baby SUV market. It has slim, aggressive-looking headlights, complex body surfacing with plenty of creases, and swathes of black plastic around the wheelarches to give it at least the look of something that could go off road.

There is a basic flat paint scheme, but the vast majority of buyers will pay the extra to go for one of the metallic or 'metallic pearl' finishes. Hyundai is dividing the colours into two groups - 'Neutral', which includes white and silver, and 'Vivid', which brings a strong red and blue, plus a lime-green shade that's called 'Acid Yellow'. The Vivid shades also come with a contrast roof colour.

The entry-level version of the Kona gets 16-inch alloy wheels, while SE models step this up to 17 inchers. Everything above that gets 18-inch rims, which look suitably chunky under the plastic-clad arches. 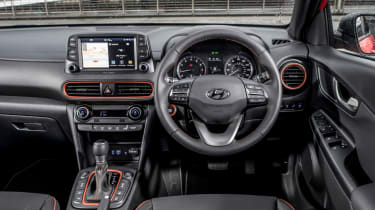 Inside, it's a far more conventional affair. True, there's the odd flourish - a little bit of body-coloured surround on the dashboard, and body-coloured seat belts (they can look garish if you've gone for Acid Yellow, for example). But in the most part, the Kona's cabin could be any other Hyundai.

That's particularly true on the facia, which mixes conventional dials with, on all but the entry-level edition, a colour touchscreen display that's mounted high up in the centre of the dashboard. It all makes perfect functional sense, but it's also relatively short on inspiration - a match, in many ways, for the ultra-conservative cabin of the SEAT Arona.

The quality of the materials is harder to fault; there are soft-touch fabrics in more of the door lining than you'll find in lots of the Kona's rivals, and you'll have to look hard to find some really scratchy plastic. The Hyundai feels like it's absolutely on the money in this area, at least.

Go far enough up the range and you'll get some extra tech to make the front cabin feel a teeny bit more special; there's a head-up display, for example, which is still a relatively rare feature in this class.

The rest of the controls are easy to access, with simple switches for the heating and ventilation, and other features on higher-end models, such as the heated and cooled seats, controlled via buttons at either side of the gear stick.

While Hyundai’s infotainment systems have been among the most intuitive to use over the past couple of years, 2019 saw the introduction of an improved set-up. The new 10.25-inch touchscreen is larger than the old display, and is graphically sharper and gains new features. The home-page offers a split screen that splits into either two or three, allowing both entertainment and detailed mapping functions to be shown at the same time.

Save for a couple of extra customisation options for layouts and widgets, the interface is largely similar to the previous setup: in other words, everything is logically laid out, the map screen is clear and easy to read, and the inclusion of physical shortcut buttons makes it easy to find your way around in the unlikely event that you get lost among the sub-menus. Some systems – the VW group offerings, for example – can look prettier, but in terms of ease-of-use, there’s really not much in it. 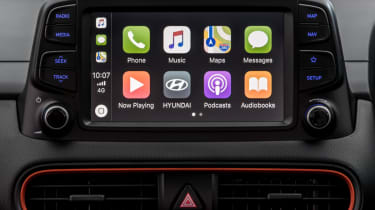 The big screen is fitted to the Hybrid and EV Premium and Premium SE as standard, with the petrol versions receiving either a 7- or 8-inch touchscreen. The electric SE model retains a 7-inch screen and, while it lacks built-in navigation, it includes Android Auto, Apple CarPlay and a rear-facing parking camera included.

Those top models also get an uprated eight-speaker Krell audio set-up, plus a head-up display as standard; it's a comparative rarity for the class, and Hyundai's system is one of the largest on the market, with information being projected onto an eight-inch screen beyond the instrument binnacle.