Petrol models are a little thirsty, but the efficient hybrid model is among the cheapest cars in its class to fuel and tax

Hyundai believes that it can attract downsizers and hip, trendy young families into the Kona. And it's being pretty bold with the pricing as a result.

The figures are pitched against other small SUVs instead of Hyundai's other small cars, like the i20 or even the i30, so they start at a similar level to the SEAT Arona (from around £18,000). That means they're higher than, say, the C3 Aircross's entry point - but that Citroen model is so basic that it's almost an irrelevance. Let's just say that the Kona is in the ballpark as far as its mainstream variants go. 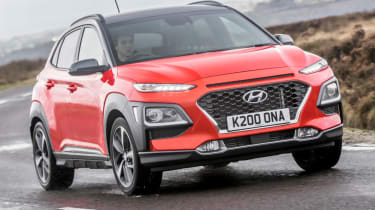 There are a few anomalies in the Hyundai's fuel efficiency that you need to watch out for, and WLTP testing has made things even more complicated. The 1.0-litre version's official economy and CO2 figures start at 45.6mpg and 142g/km – but these only apply to the most basic S trim, which gets a (much lighter) can of tyre sealant instead of a spare wheel, and runs on 16-inch tyres.

The SE and Premium 1.0 models – complete with a space-saver spare and either 17 or 18-inch wheels – manage official figures of 44.1mpg and 146g/km. These are some way adrift of the likes of the C3 Aircross and Arona, and the Citroen offers a diesel option, too, that returns over 60mpg.

The higher-powered Kona is worse again, because while it's an efficient enough engine, it's paired up with a dual-clutch auto gearbox and four-wheel drive. It only manages official figures of 34.0mpg and 189g/km.

The hybrid model strikes a neat balance in the range and offers a maximum return of 56.5mpg and CO2 emissions of 114g/km in SE trim.

The EV's day-to-day running costs are very low, while Hyundai also offers you the option of buying and installing a 7kW charger for around £300.

If you're looking to buy a petrol Kona, you're looking at insurance groups ranging from 9-19, with the 1.0 petrol engine at the lower end of the spectrum and the 1.6 petrol at the top. The Kona Electric has higher insurance ratings from groups 22-27. 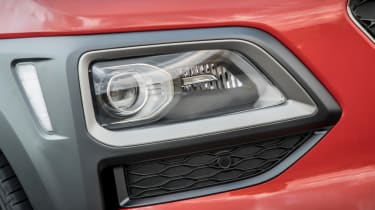 The Kona petrol-engined range has average residual values of around 44% over three years and 36,000 miles. The hybrid models are predicted to return a little over 50% over the same period, while the fully-electric versions are just behind with an average of 49.5%.