Is the new Peugeot 208 good enough to live up to the 205 legend? We hit the road to reveal all 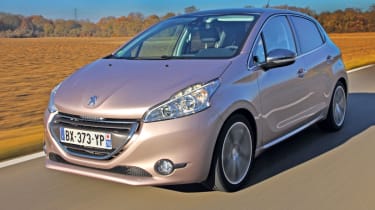 Has Peugeot done enough with the 208 to win back class leadership? The car is certainly up there with the best in the sector: it’s a great-looking machine with a fantastic, high-quality interior, that drives well and is super-efficient. It’s a far more grown-up approach than previous Peugeot superminis – and the even better news is that it can still put a smile on your face.

This is the car Peugeot says will win back its historical leadership of the supermini market. The company admits it lost its way a little with the 207, allowing the Ford Fiesta, then the VW Polo, to take the lead. Now it’s back with a bang.
Cleverly, the 208 is smaller than the 207 (by 7cm, at 396cm long) yet has 5cm extra rear legroom. That’s down to a total repackaging of the cabin and new front seats. So now, the back bench is fine for all bar the tallest adults, while headroom is good, too – as long as you don’t go for the panoramic sunroof. Surprisingly, the boot is bigger as well – up by 15 litres to 285, 10 less than the Fiesta’s.

So the 208 is spacious, and you can make up your own mind whether it’s stylish (we think it looks great), but Peugeot’s reputation has been built on a very famous supermini – the 205 – and its brilliant drive. The 206 and 207 nearly ruined that, yet the 208 is really rather good, riding nicely with a touch of firmness, and with neat handling.
The tiny steering wheel adds to the sporty feeling. At 3cm less in diameter than the 207’s and the smallest in the class, it makes the car feel alert, with quick reactions once away from dead-ahead. A further benefit is that you view the dials over the top rather than through it, giving a head-up feel.
Visibility forward was a bit of an issue in the left-hand-drive cars we drive, though: you could find yourself peering around the A-pillars through corners.
Cabin quality at least matches the class best, and is dominated (in all but base cars) by a large touchscreen for entertainment, telephone and navigation. The much less cluttered dash means all the other controls are easier to find, while kit specs are generous through all five trim levels. The driving position is spot-on, and rear access even in the sharper-suited three-door is easy.
As well as the three and five-door bodies, you’ll get a choice of five petrol or three diesel engines. The petrol highlight will be a three-cylinder 1.0 with 65.6mpg and 99g/km of CO2, while there will be 1.2, 1.4 and two 1.6 petrols, too.
All diesels sit below 100g/km, with the lowest getting down to 87g/km, equating to a claimed 83.1mpg. Peugeot’s EGC auto manual box is available on the two lower-powered diesels, too.
We drove the range-topping 112bhp 1.6 e-HDi that claims 74.3mpg. It’s smooth, although performance isn’t scintillating, as that hunt for high mpg and low CO2 means the gearing is quite long. Similarly, the 120bhp 1.6 VTi isn’t as much fun as you’d expect, but it’s pleasant enough: quiet, refined yet with a sporty note.
Despite weighing 110kg less than the 207, the 208 is still much heavier than the 205 – thanks in no small part to its safety kit. But by the standards of most of today’s superminis, it’s a fine balance of ride, handling and performance. A GTi would have even more to live up to if the concept displayed at the Geneva Motor Show gets the green light.
The 208 won’t arrive in the UK until June, when we’ll know full prices and specs. Starting at a tempting £9,995, it’ll sit competitively among its rivals.
Share this on TwitterShare this on FacebookEmail