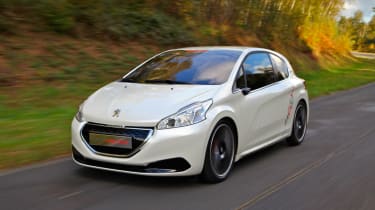 The Peugeot 208 Hybrid FR is a real innovation by Peugeot and Total, and what they’ve come up with is seriously impressive. To get 148mpg from a non plug-in hybrid is not easy, and especially not in one that can sprint from 0-62mph in eight seconds. Some of the tech here is decades away from production but much of it is merely a few years away, and that’s great news for car buyers.

Peugeot 208 GTi-style performance, combined with 148mpg. Those claims alone are enough to make you take notice, but the Peugeot 208 Hybrid FE only becomes more remarkable the more you delve into its detail, as Auto Express found out during an exclusive test drive.

The FE is a joint project between Peugeot and Total to produce a car based on the 208, to the same dimensions, but that can sprint from 0-62mph in just eight seconds and emits only 49g/km of CO2. It hits the target for the benchmark sprint time and even surpasses the CO2 figure, with the final number standing at 46g/km.

So, how did they do it? Well, they chopped 200kg from the kerbweight using composite materials for the bodyshell, lightening the engine materials and replacing the glass with polycarbonate amongst a thousand other weight-saving measures. The attention to detail extends to a new sealing method for the doors which saves 1kg. Then they slashed aerodynamic drag by 25% – hence the new front end and rear design – and the 1.2-litre three-cylinder petrol engine is tweaked and fitted with an electric motor.

Even the suspension is unconventional. Instead of springs and wishbones it uses two fibreglass ‘blades’, saving 25kg in total. We expected huge compromises to ride quality but it’s surprising how you could drive this without actually noticing the innovative suspension set up. Obviously it’s far from perfect, and Peugeot admits that the suspension is one of the most far-fetched elements of this concept, but it’s a great idea.

The FE Hybrid starts on electric power so you just prod the throttle to get going. It moves off with a nosiy whine from the electric motor and a quick tug on the steering wheel reveals there’s no assistance. The wheels are so narrow and the car so light that it’s a breeze to get the wheels pointed in the right direction.

In ‘Eco’ mode the FE moves on electric power for as long as it can and there’s a decent amount of punch from the motor – after all it is the same one from the 908 HY Le Mans racer. Here it produces 40bhp of power but that’s more than enough to get you up to speed and cruising around – Peugeot reckons it’ll do around five miles on electric power alone.

When the battery power drops the three-cylinder engine kicks in with a throaty roar to charge it up, but if you’ve got it in ‘Fun’ mode then both power sources will drive the front wheels. With a total of 107bhp on offer you can floor the throttle, feel the surge of electric power and then the pull from the engine. It’s a nice consistent hit of acceleration helped all the more by the fact that the electric motor fills in the torque gap between gear changes.

Peugeot says it never set out to make the FE a great-handling car, so high-speed cornering wasn’t a part of our time at the wheel. It doesn’t seem to matter, though, because the point of this whole endeavour was to show that Peugeot is serious about lowering running costs without taking away the fun.

And the good news is, this concept really does work and the technology isn’t too far away. The hybrid system, the aerodynamics, the composite materials and the more efficient engine are all possible now. We’d put money on lessons learned from this project making a 100mpg Peugeot possible in the next few years.