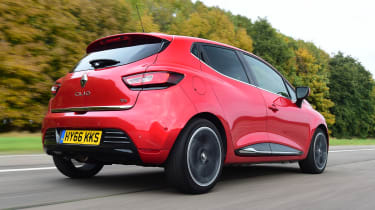 A recent update for the Clio saw new kit and a subtly different look added, but the engine range and gearbox options remained the same. You can spec Renault's six-speed EDC auto with either the 1.2 TCe 120 turbo petrol, or the 90 version of Renault's venerable 1.5 dCi diesel.

As the Clio doesn't really stand out in any area in terms of driving, the addition of the auto box doesn't really disrupt the order. Fortunately, the Clio is a roomy supermini with plenty of kit, which is where it maintains its strengths.

The other option in the Clio range is the rapid Renaultsport version. It has a 220bhp 1.6-litre turbocharged engine and only comes with a six-speed EDC gearbox. Some RS fans said that this spoilt its purity in comparison with its predecessors, but it's still a great driver's car with the option of changing gears yourself with the steering wheel paddles.