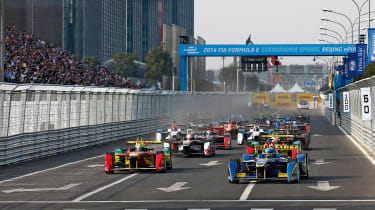 Over the past six years, the FIA Formula E championship has become an established part of the motorsport scene. For its seventh season – due to start in Saudi Arabia this November, coronavirus restrictions permitting – the electric single-seater series gains official FIA World Championship status, putting it on par with Formula One and the World Rally Championship in terms of official prestige.

With big-name drivers filling the grid, manufacturer involvement and high-profile global cities packing the calendar, the series has come a long way. It doesn’t seem that long ago when the cars first turned a wheel in anger, on 13 September 2014, in a race with the somewhat cringeworthy title of the ‘Beijing ePrix’.

That event will always be remembered for a dramatic last-corner collision between leaders Nicolas Prost, driving for the Renault e.dams team, and ex-F1 man Nick Heidfeld, at the wheel of a Mahindra entry. This allowed Heidfeld’s fellow F1 alumnus Lucas di Grassi to score a history-making win for the Audi Sport Abt squad.

Prost – son of three-time F1 champion Alain – had taken pole position and been leading the race comfortably, until a late charge brought Heidfeld up to his tail. On the penultimate lap through the last chicane, Heidfeld feinted to the inside of the final corner. A lap later, he did the same again, but this time went for the move.

As he did so, Prost shifted to the left to cover the apex. But the defensive move came too late, and the cars collided. This sent Heidfeld spinning, which turned into a huge crash as he was launched over the kerbs into the barriers. Fortunately, both drivers were unhurt. Behind race winner di Grassi, Frenchman Franck Montagny (Andretti Autosport) and Brit Sam Bird (Virgin Racing) completed the podium, after di Grassi’s team-mate Daniel Abt was demoted to 10th for using more than his allotted amount of battery energy.

Several names from the inaugural race, including di Grassi and arch-rival Sebastien Buemi, Abt, Bird, Nelson Piquet Jr and Jerome d’Ambrosio, as well as the Mahindra, Venturi, Andretti, ABT and e.dams squads, are now established Formula E stars. Others, such as Jarno Trulli and his eponymous team, Heidfeld and his Mahindra team-mate Karun Chandhok, and the NextEV and Amlin Aguri squads, have since disappeared. 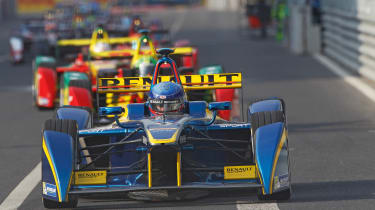 While a fully electric race series was a novelty in 2014, Formula E has shown it’s a viable concept. In the years since, a support series for Jaguar I-Pace racers has been created, while an electric TCR touring car series is in the works. Moves are also afoot for the FIA World Rallycross championship to transition to fully or part-electric power, while Formula E founder Alejandro Agag has established another electric series.

The ‘Extreme E’ championship – currently set to kick off early in 2021 – will see Dakar-style off-road machines compete in locations all around the world that are threatened by climate change, with the aim of raising the profile of efforts to repair or reverse the damage. To support gender equality, the series also recently announced it would be mandating that each team enter one male and one female driver for its events.

Are you a Formula E fan? Let us know your favourite moment in the comments below...