The Kona isn't involving to drive, and while it stays pretty composed in corners, the ride gets jittery as soon as the road surface worsens

We haven't really seen a small SUV that's genuinely involving to drive - and the Kona doesn't come close to bucking this trend. It has few vices, admittedly, but there is precious little scope for enjoyment either.

The 1.0 engine has just about enough grunt for most everyday situations, although you'll need to keep an eye on the rev-counter if you're about to attempt overtaking. That's because the three-cylinder turbocharged engine has a pretty narrow power band; Hyundai claims peak torque between 1,500rpm and 4,000rpm, but it feels like it starts about 700rpm higher than that.

Drop out of the zone and you'll soon find yourself becoming impatient as you wait for the motor to spin up to its best potential again. Other three-cylinder units on the market are punchier – notably Citroen's and Peugeot's excellent 1.2 PureTech.

Most Konas have a six-speed manual as standard (a seven-speed DCT auto is standard on the 1.6-litre petrol). It isn’t the slickest box, but it’s quick enough as long as you’re positive with shifts. The squared-off gear lever feels awkward in your hand, however. 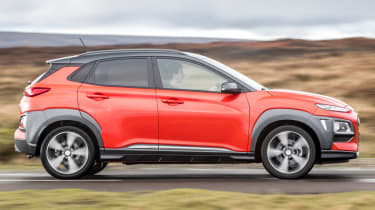 The chassis is set up to understeer at anything approaching its limit, and it does - although in fairness, the front end hangs on gamely unless you really throw it at a corner. This in itself is harder to do than it should be, because the steering - presumably calibrated in the name of ‘sportiness’ - is unusually heavy for a car of this type.

The car stays pretty flat in corners, but the trade-off for this is a brittle ride on all but smooth surfaces; the rear end jolts over potholes and expansion joints, and the Kona never quite settles down over the sort of patchwork tarmac that you tend to find at the edges of plenty of British roads.

Tyre size will play a part in this, of course. S and SE models come with 16in and 17in wheels respectively, and we'd strongly recommend you ask for a back-to-back test before committing to the 18in items that come with Play, Premium, Premium SE and Premium GT versions.

At least the Kona’s pretty quiet once it’s up to speed, as the characterful three-cylinder note fades away. Wind noise seems well isolated, too, so there’s not much of a rush from around the side mirrors.

The Kona Electric goes around corners in much the same way as its combustion engined counterparts, but it quieter, smoother, more powerful drivetrain makes it by far the most pleasant model variant to drive.

If you’re willing to stretch a couple of grand beyond the cost of the 1.0-litre Kona, the Hybrid model makes for a compelling choice. It’s powered by a mix of 1.6-litre petrol engine and a small electric motor, delivering a combined output of 139bhp and 265nm of torque. The main benefit here is fuel economy: on paper it’s significantly more frugal than the rest of the range.

The Kona comes with a choice of engines – although in truth, the vast majority of customers will end up in the more modest version. It's a turbocharged 1.0-litre three-cylinder motor, producing 118bhp and 175Nm of torque.

On the whole, this engine is punchy enough for a car like the Kona. But in practice, we find its powerband a little narrow - and it's quick to punish you with sluggish progress if you allow the revs to dip much below 2,000rpm. You can easily hear that it's a three-cylinder engine when it's being revved, thanks to the characteristic thrum, but at a steady cruise the 1.0 drifts nicely into the background.

The turbocharged 1.6-litre four-cylinder engine has 175bhp and 265Nm. This feels an altogether more grown-up offering, with real pace (0-62mph in under eight seconds) and plenty of mid-range punch when you need it. It's available only with a seven-speed dual-clutch automatic gearbox and four-wheel drive, though - and restricted to the most expensive trim level.

Hyundai offers the EV model with either a 39kWh battery delivering 134bhp, or a 64kWh 201bhp version. The sprint from 0-62mph is dispatched in a respectable 7.9 seconds, moving on to a top speed of 104mph.

The hybrid model sits between the two petrols in terms of performance. 0-62mph takes a reasonable, if not stunning, 11.6 seconds – but the lethargic dual clutch gearbox and rather thrashy engine note mean that the 1.0-litre unit feels more lively despite the deficit. However, the fact that a 1.56kWh battery lets the hybrid operate in pure electric mode for short periods means that it’s silent and smooth at lower speeds, so it’s the more relaxing (and efficient) option if you spend plenty of time driving in heavy traffic.