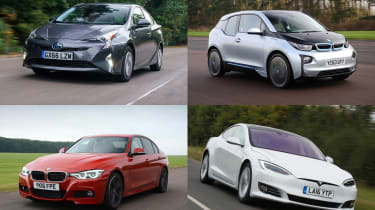 Cars with low emissions are not only a more environmentally-friendly option, they're often good for your wallet too as they make their fuel go further. So here we've highlighted 10 of the best green cars currently on the market in the UK from a variety of categories.

Green cars are appealing to business users as well as regular buyers, as the lower the emissions, the lower the Benefit In Kind tax rates for said vehicle. This used to be the case for road tax, too, although with the change to the road tax rules in April 2017, this no longer applies.

• Most economical cars to buy

But how do 'green' cars earn their credentials? Well, it depends on which manufacturer you go with. The traditional way is to tune a car with a conventional petrol or diesel engine so that it delivers greater efficiency than any other variant in the range. Tweaks include longer gearing, low rolling resistance tyres, enhanced aerodynamics and a detuned engine. This used to be the way that Volkswagen produced its BlueMotion models, but as technology has progressed, the most recent BlueMotion models don't feel as compromised in terms of performance or even the kind of standard kit on board. It's the same story with Peugeot and Citroen's latest BlueHDi diesels, which offer class-leading efficiency, but don't require much in the way of compromise.

The other route makers take is to go for the hybrid option. Some cars offer 'closed hybrid' systems (think of hybrid models from Toyota and Lexus), while others are plug-ins. The latter models feature bigger battery packs that can be charged from the mains, and allow these models to travel further on battery power alone, without using the engine at all.

All hybrid models work on the same principle, though, with a combustion engine used in conjunction with an electric motor and battery pack to get power to the road. Most rely on the engine to be the main power source with the electric motor providing additional power when conditions are suitable. However, there are exceptions, such as the BMW i3 Range Extender, which is chiefly an electric vehicle, but also has an engine on board that acts as a generator to recharge the batteries. As a result, it's the electric motor that's driving the car, not the engine, and is more of a safety net in case the car's electric range falls short.

The other option is the full electric car (EV). These need to be charged no matter what you're doing, so they need off-street parking and preferably some kind of high-voltage charging method. While that can complicate matters, it does at least mean zero-emissions driving, with the worst pollutants coming from the source of energy production. If that includes solar, wind or hydroelectric power generation, then you really can claim to be green motoring.

Choosing the best green car for you

The best green car for you depends on a number of factors. You'll need to work out how much you want to spend, plus what sort of driving you'll be doing. For long-distance travel, an electric car is likely to be out of the question - charging times are reducing, but they're still not as fast as it is to fill a fuel tank.

However, if you're using a car for a short commute, then an electric car could be perfect, as you could charge it at home and then again at work - as long as you've got the facility to do so. A hybrid aims to combine the best aspects of an electric car and a conventional one. But it's compromised in both areas, because you need to make sure the battery pack is fully charged and in use, otherwise you're just using the conventional petrol engine (which isn't very efficient when used on its own) to power a car that's heavier than standard courtesy of said battery and electric running gear.

Here we've listed our favourite cars that can claim to be green - note that these are not necessarily the most efficient cars out there, but rather the ones we think are the best to buy right now.

Tell us what you think of our green car picks in the comments section below...

See our list of the best small hybrid cars to buy or read more of our best car recommendations...