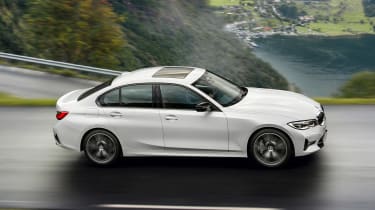 BMW has announced it will launch mild-hybrid variants of the 3 Series saloon and X3 and X4 SUVs this summer. The announcement was confirmed in the brand’s quarterly update, in which it committed to a 20 percent reduction in CO2 emissions over 2019. Similar tech is also due to arrive in the 1 Series later this year.

The 48-volt mild-hybrid system has been offered as standard on the entry-level 5 Series diesel since autumn last year. It combines BMW’s 187bhp turbocharged 2.0-litre four-cylinder diesel engine with a compact battery pack and an integrated starter-generator, which provides up to an additional 11bhp under acceleration.

When coasting at speeds below 99mph, the mild-hybrid system disengages the combustion engine to the benefit of fuel economy. The technology also switches off the engine when decelerating from speeds of 9mph or lower, using the kinetic energy collected when braking to charge the battery pack.

Elsewhere in the 3 Series range, the 318i has ditched its three-cylinder petrol engine for a more powerful 156bhp 2.0-litre four-cylinder unit. While the 1 Series hatchback has been offered with a 187bhp 2.0-litre diesel engine since January, it won’t receive mild-hybrid assistance until later this year.

What is a mild-hybrid? Head over to our sister site DrivingElectric to find out more...