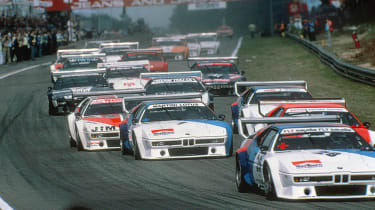 Any motorsport series with Niki Lauda and Nelson Piquet as its champions is deserving of a closer look, and the BMW M1 Procar Championship is among the more notable examples of that staple of motor racing: the one-make championship. These series are in some ways the polar opposite of Formula One’s fierce technical competition, instead putting all drivers at the wheel of equal cars in the hope that talent wins out in a way it sometimes doesn’t in a Grand Prix.

BMW always intended to take its sleek M1 supercar, unveiled in 1978, to the racetrack, and examples were initially prepared for the Group 5 category of sportscar racing. But the head of BMW Motorsport at the time, Jochen Neerpasch, had another idea, aimed at garnering a lot more exposure for the car and brand.

It wasn’t just a case of getting a couple of contemporary F1 drivers to race M1s on a Grand Prix weekend. Rather, the five fastest drivers from Friday’s free practice sessions would be placed in five BMW ‘works’ entries in the M1 series, with the top five grid slots reserved for them. The remainder of the grid was made up of touring car and endurance drivers in cars entered by privateer teams.

The road car’s 3.5-litre M88 straight-six engine was tuned to produce 470bhp (up from 277bhp) and a large rear wing was added to help tame the production car’s somewhat wayward on-the-limit handling. Weight was reduced to 1,020kg and the racing version had a 0-62mph time of 4.5 seconds. In order to get a sufficient number of cars built in time for FIA homologation requirements, several subcontractors built batches of M1 racers, including Osella in Italy and Ron Dennis’s Project Four in the UK.

There were some snags: drivers of teams running Michelin tyres in F1 couldn’t take part for contractual reasons, because the M1s used Goodyear rubber. And both Renault and Ferrari balked at letting their charges participate in such prominent promotion of another car brand’s halo product. 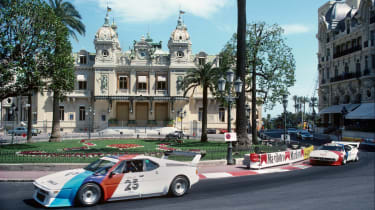 Nonetheless, the series got under way in 1979, with Italy’s Elio de Angelis winning the inaugural race at Zolder. The first season’s championship would eventually go the way of Niki Lauda, with three victories and a second place. The Austrian ace came away with a tidy extra paycheck and a brand-new M1 road car to enjoy for his trouble.

The 1980 title was secured with a run of three victories in the final three races by Nelson Piquet, who would go on to lift the F1 driver’s crown three times in the coming decade. The Procar series didn’t make it to a third season, because BMW switched focus to its F1 engine programme with Bernie Ecclestone’s Brabham squad. But the cars, built to FIA Group 4 regulations, continued to be campaigned by privateers at the Le Mans 24 Hours and other top-line sportscar events, while some went tarmac rallying, too.

In the years since Procar ended, there have been frequent suggestions and attempts to get a similar one-make series off the ground – including one involving spectacular silhouette-bodied Alfa Romeo 164s powered by BMW V10 F1 engines.

But with F1 becoming an ever-more commercially valuable activity throughout the eighties and nineties, teams have mostly been reluctant to let their star drivers risk incident or injury by racing elsewhere – especially on a Grand Prix weekend.

What's your favourite BMW M car? Let us know in the comments below...